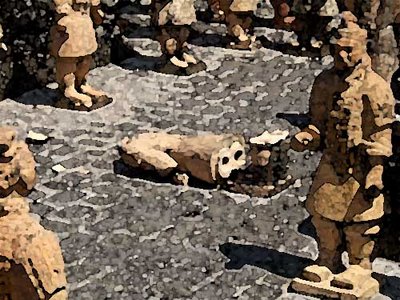 Traveling between assignments in late February or March of 1966, I was waiting for a flight from Clark Air Base in the Philippines. In a ground level transit lounge I wasted hours looking for an open seat on anything, cargo or passenger. A GI is good at waiting. My thoughts were elsewhere or I was sleeping, but I became aware of a metallic clatter and voices all around me. I opened my eyes and I was an island in a sea of gurneys and wheel chairs passing towards me on both sides. Medics, nurses and doctors unloading two plane loads of broken soldiers, marines and airman dressed in a common uniform of gauze, blue bathrobes and hospital gowns. Some had urine bags for holsters and others trailed IV's of different colors. They smelled of iodine and worse. Blue eyes and brown, blondes and negroes, broken men that looked like boys. I did not want to look at their faces but never broke my contact with any and all. Some nodded, others blinded and pale, passed like mannequins being taken to storage. I did my duty and sat in purgatory.

When I listen to the rhetoric about war, I see those faces. I smell them. I share their shame of being broken men in soiled diapers and missing parts. I cannot speak for any of them but I heard them all.

Sit in your chair. Put down the rhetoric and heroic nonsense prattled by those that do not know better.
Look and listen to an American soldier that needs our help. and pray that he be fixed.
Posted by Deuce ☂ at 12/21/2006 12:11:00 AM