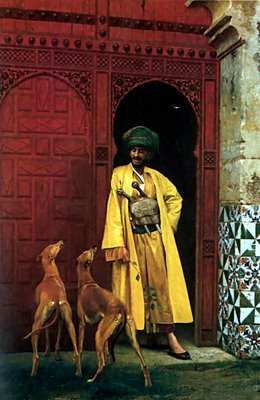 If al-Reuters isn't on the Mohammedan payroll it's because they have a contract with them and if this isn't pure propaganda designed to gin up hatred in the Islamic world, I don't what it is.

In U.S., fear and distrust of Muslims runs deep
by By Bernd Debusmann, Special Correspondent

WASHINGTON (Reuters)- When radio host Jerry Klein suggested that all Muslims in the United States should be identified with a crescent-shape tattoo or a distinctive arm band, the phone lines jammed instantly.

The first caller to the station in Washington said that Klein must be "off his rocker." The second congratulated him and added: "Not only do you tattoo them in the middle of their forehead but you ship them out of this country ... they are here to kill us."

Another said that tattoos, armbands and other identifying markers such as crescent marks on driver's licenses, passports and birth certificates did not go far enough. "What good is identifying them?" he asked. "You have to set up encampments like during World War Two with the Japanese and Germans."

At the end of the one-hour show, rich with arguments on why visual identification of "the threat in our midst" would alleviate the public's fears, Klein revealed that he had staged a hoax. It drew out reactions that are not uncommon in post-9/11 America.

Klein's show followed a week of heated discussions on talk radio, including his own, and online forums over an incident on November 22 involving six Muslim clerics. They were handcuffed and taken off a US Airways flight after passengers reported "suspicious behavior" that included praying in the departure gate area.The clerics, on their way to a meeting of the North American Imams Federation, were detained in a holding cell, questioned by police and FBI agents, and released. Muslim community leaders saw the incident as yet more evidence of anti-Muslim prejudice.

The propaganda in point (or if we really want to be generous, the sloppy journalism) is -"They were handcuffed and taken off a US Airways flight after passengers reported "suspicious behavior" that included praying in the departure gate area."

Fortunately, for those seeking the truth, Audrey Hudson has a more accurate story Imam disputes tie to Hamas in today's Washington Times. Ms. Hudson interviewed a Mr. Omar Shahin, one of the Imams involved in the incident and writes:

The issue of whether they were led off the plane in handcuffs may seem irrelevant or of little consequence but a painting is done one brush stroke at a time. Personally, I thought the Abu Ghraib "scandal" was overblown nonsense but what I thought was irrelevant in light of the mileage the issue provided to the other side. This incident will be portrayed throughout the Islamic world as an example of how devout praying Muslims are mistreated and scorned in the "Great Satan."

The article goes on to discuss recent polls by the Gallup organization and Council on American Islamic Relations (CAIR) showing widespread anti-Muslim sentiment. The CAIR poll indicates that 33% of the American people associate the word "Islam" with "war, hatred and terrorists." Debussmann writes, "The war in Iraq has contributed to such perceptions." Oh really? Events throughout the Islamic world have nothing to do with forming those opinions? Apparently not. CAIR's Executive Director, Nihad Awad, said on The Factor, "there is no link between Islam as a religion and fascists." This is the latest Mohammedan meme - that the "terrorists are not Muslims and no Muslims are committing these heinous acts that we see happening all over the world." The problem is that too many Muslims like Awad will not acknowledge that the terrorists invoke the name of Allah when committing their terror. Instead, when confronted, they usually deflect the issue to the huge worldwide terror problem of "fanatical Christians" or claim that "it's all the fault of the US and of course, the Jews." Lie by lie, the hatred is sown and carefully cultivated. As the lies continue, the poll numbers will get worse.

American people can see through the subterfuge.