Can the US lose its army in Iraq? Say it ain't so. 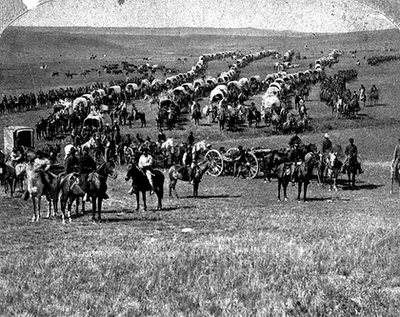 George Armstrong Custer (left center in light clothing) leads a military expedition into the Black Hills of Dakota Territory in 1874. Custer's incursion violated the Fort Laramie Treaty of 1868 and laid the groundwork for war between the Lakota and the United States when he announced that gold had been discovered in this most sacred of the Lakota's lands. Photograph by William H. Illingworth.

This article from The American Conservative outlines the worst case scenario for the US in Iraq. Is there any chance this could play out? Is this possible or is it BDS at the max?

How to Lose an Army
Plow deep into Iraq and dare Iran to strike.
December 18, 2006 Issue
Copyright © 2006 The American Conservative

Lose a war, lose an election. What else did the Republicans expect? That is especially true for a “war of choice,” which is to say a war we should not have fought. It is difficult to imagine that, had Spain defeated the U.S. in 1898, the Republicans would have won the election in 1900.

What does the Democrats’ victory mean for the war in Iraq? Regrettably, not what it should, namely an immediate American withdrawal from a hopelessly lost enterprise. Neither the Democrats nor the Republicans, both of whom now want to get out, desire to go into the 2008 election as the party that “lost Iraq,” which is how taking the lead for withdrawal could be painted. Instead, both parties in Congress and the White House are likely to agree only on a series of half-measures, none of which will work. We will stay bogged down in the Iraqi quagmire for another two years, as the troops caught in Operation Provide Targets continue to die.

A more critical if less obvious question is what do the results of the election mean for a prospective attack on Iran? On the surface, the Democrats’ seizure of both houses of Congress would seem to be good news. Having won their majorities because the American people want out of a war, they ought to be reluctant to jump into a second one.

Regrettably, that logic may be too simple. Because an attack on Iran will be launched with no warning, the Bush administration will not have to consult Congress beforehand. Congress could take the initiative and forbid such an attack preemptively (“no funds may be expended…”). But in an imperial capital where court politics count far more than the nation’s interests, Democrats may prefer to risk a second war, and a second debacle, rather than open themselves up to a charge of being weak on terrorism. The Democrats’ approach to national-security issues through the fall campaign was to hide under the bed and ignore them as much as possible. That worked politically, so they are likely to stick with it.

The Bush administration, for its part, will be tempted to do what small men have done throughout history when in trouble: try to escalate their way out of it. The White House has already half-convinced itself that the majority of its troubles in Iraq stem from Iran and Syria, a line the neocons push assiduously.

The departure of Donald Rumsfeld, which was greeted in the Pentagon with joyful choruses of “Ding-dong, the witch is dead,” may help to avert an invasion. His successor, Robert Gates, has no background in defense and is therefore likely to defer to the generals, for good or for ill. In this case for good, as the generals emphatically do not want a war with Iran. But for Gates to block White House demands for an attack on Iran, he would have to threaten to resign. Is he the sort of man to do that? That’s not how bureaucrats build their careers, an observation that holds for the generals as well.

The elephant in the parlor is, of course, the fact that Israel wants an attack on Iran, and for Republicans and Democrats alike, Israel is She Who Must Be Obeyed. Israeli Prime Minister Ehud Olmert ran to Washington as soon as the election was over, and the subject of his discussions with President Bush is easy to imagine. Who will do the dirty deed and when? Iran has already announced that it will consider an attack by Israel an attack by the U.S. as well and respond accordingly, so the difference may not much matter.

That response should concern us, to put it mildly, for that is where a war with Iran and the war in Iraq intersect. The Iranians have said that this time they have 140,000 American hostages, in the form of U.S. troops in Iraq. If either Israel or the U.S. attacks Iran, we could lose an army.

How could such a thing happen? The danger springs from the fact that almost all the supplies our forces in Iraq use, including vital fuel for their vehicles, comes over one supply line, which runs toward the south and the port in Kuwait. If that line were cut, our forces might not have enough fuel to get out of Iraq. American armies are enormously fuel-thirsty.

One might think that fuel would be abundant in Iraq, which is (or was) a major oil exporter. In fact, because of the ongoing chaos, Iraq is short of refined oil products. Our forces, if cut off from their own logistics, could not simply fuel up at local gas stations as German Gen. Heinz Guderian’s Panzer Corps did on its way to the English Channel in the 1940 campaign against France.

There are two ways, not mutually exclusive, that Iran could attempt to cut our supply line in Iraq in response to an attack on Iranian nuclear facilities. The first would be by encouraging Shi’ite militias to which it is allied, including the Mahdi Army and the Badr Brigades, to rise up against us throughout southern Iraq, which is Shi’ite country. The militias would be supported by widespread infiltration of Iranian Revolutionary Guards, who have shown themselves to be good at this kind of thing. They are the people who trained and equipped Hezbollah for its successful defense of southern Lebanon against the vaunted Israeli army this past summer.

The Shi’ite militias already lie across our single supply line, and we should expect them to cut it in response to Iranian requests. We are already at war with the Mahdi Army, against which our forces in Iraq have been launching a series of recent raids and air strikes. A British journalist I know, one with long experience in Iraq, told me he asked the head of SCIRI, which controls the Badr Brigades, how he would respond if the U.S. attacked Iran. “Then,” he replied, “we would do our duty.”

Iran has a second, bolder option it could combine with a Shi’ite insurrection at our rear. It could cross the Iran-Iraq border with several armored and mechanized divisions of the regular Iranian Army, sever our supply lines, then move to roll us up from the south with the aim of encircling us, perhaps in and around Baghdad. This would be a classic operational maneuver, the sort of thing for which armored forces are designed.

At present, U.S. forces in Iraq could be vulnerable to such an action by the Iranian army. We have no field army in Iraq; necessarily, our forces are penny-packeted all over the place, dealing with insurgents. They would be hard-pressed to assemble quickly to meet a regular force, especially if fuel was running short.

The U.S. military’s answer, as is too often the case, will be air power. It is true that American air power could destroy any Iranian armored formations it caught in the open. But there is a tried-and-true defense against air power, one the Iranians could employ: bad weather. Like the Germans in the Battle of the Bulge, they could wait to launch their offensive until the weather promised a few days of protection. After that, they would be so close to our own forces that air power could not attack them without danger of hitting friendlies. (This is sometimes know as “hugging tactics.”) Reportedly, the Turkish General Staff thinks the Iranians can and will employ this second option, no doubt in combination with the first.

Perhaps the greatest danger lies in the fact that, just as the French high command refused to consider the possibility of a German attack through the Ardennes in 1940, Washington will not consider the possibility that an attack on Iran could cost us our army in Iraq. We have made one of the most common military mistakes—believing our own propaganda. Over and over, the U.S. military tells the world and itself, “No one can defeat us. No one can even fight us. We are the greatest military the world has ever seen!”

Unfortunately, like most propaganda, it’s bunk. The U.S. Armed Forces are technically well-trained, lavishly resourced Second-Generation militaries. They are today being fought and beaten by Fourth-Generation opponents in Iraq and Afghanistan. They can also be defeated by Third-Generation opponents who can react faster than America’s process-ridden, PowerPoint-enslaved military headquarters. They can be defeated by superior strategy, by trick, by surprise, and by preemption. Unbeatable militaries are like unsinkable ships: they are unsinkable until something sinks them.

If the U.S. were to lose the army it has in Iraq to Iraqi militias, Iranian regular forces, or a combination of both, cutting our one line of supply and then encircling us, the world would change. It would be our Adrianople, our Rocroi, our Stalingrad. American power and prestige would never recover. Nothing, not even Israel’s demands, should lead us to run this risk, which is inherent in any attack on Iran.

There is one action, a possibility opened by the Democrats’ electoral victory, that would stop the Bush administration from launching such an attack or allowing Israel to do so. If our senior military leaders, especially the Joint Chiefs of Staff, would go public with their opposition to such an adventure, the new Democratic majority in Congress would have to react. The public that put it in office on an antiwar platform would compel it to answer or lose all credibility. While the Joint Chiefs would infuriate the White House, they would receive the necessary political cover from the new Democratic Congress. The potential is there, for the generals and the Democrats alike.

For it to be realized, and the disaster of war with Iran to be averted, all the generals must do is show some courage. If the Joint Chiefs keep silent now and allow the folly of an attack on Iran to go forward, they will share in full the moral responsibility for the results, which may include the loss of an army. Perhaps we should call it “Operation Cornwallis.”
___________________________________________

William S. Lind is director of the Center for Cultural Conservatism at the Free Congress Foundation in Washington, D.C.
December 18, 2006 Issue