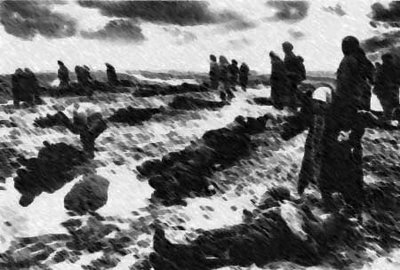 It's always interesting and often disgusting to see the world reaction to international news and current events. Of course, the left leaning BBC Have Your Say Website draws a majority of leftist, secular and humanistic commenters. Today's comments reveal the fuzzy headed, moral relativism of world opinion which according to the Democrats, Bush and Co. have needlessly alienated. Judging by the comments, that alienation may be a "good thing."

Here's a sampling of the comments most recommended (as of Saturday morning) by other commenters and readers:

This was absolutely at the direction of Bush. The timetable of the trial and the major milestones were too coincidental with the US political timetable. And of course getting Saddam out of the way removes the possibility of any awkward questions being asked (and embarrassing answers being given) in trials for his other crimes - such as what involvement western governments had in his regime over the years.

So one evil dictator has been executed for his crimes against humanity. Now all that remains is for the same justice to be dealt to Bush. Maybe then Iraq can start to recover. An illegal war is an illegal war. Those who start it should be held responsible. john, newport Recommended by 179 people
Added: Saturday, 30 December, 2006, 10:17 GMT 10:17 UK

Now the fiasco of the Saddam trial is over, I am looking forward to the much more interesting spectacle of the George Bush / Tony Blair trial for illegally invading a sovereign country against UN wishes and the murder of hundreds of thousands of civilian Iraqis, in the immortal words of george Bush 'bring it on'. Chris, Shropshire UK Recommended by 171 people

Am I alone in getting sick and tired of listening to the whining Liberal chattering classes?

They come up with any excuse to show that Dear Mr. Hussein was merely misunderstood or some other nonsense.

The man deserved what he got.

The one photograph of the gassed Kurds, including the children, was enough for me.

You are willing to pontificate and spout your Holier-than-thou clap-trap, while people such as Hussain commit genocide, you make me sick.

Absolute savagery and barbaric inhumanity drenched in false justice - that is what this execution was. This is what the puppet Iraqi regime was instructed to do by the UK/US governments. These are the "human rights" Bush/Blair preach to the rest of the world.
I wonder why they weren't brave enough to be in the pictures, smiling next to the hangman. M. M. Zaman, UK/Canada, Recommended by 156 people
Added: Saturday, 30 December, 2006, 06:57 GMT 06:57 UK

Added: Saturday, 30 December, 2006, 09:09 GMT 09:09 UK
when is Bush going to face justice for all the people who have been killed in the war in iraq jim, wigan, Recommended by 116 people
Added: Saturday, 30 December, 2006, 12:24 GMT 12:24 UK
im absolutely disgusted by events today. hypocrisy is alive and well it seems. he may have caused terrible suffering to some of his own people, but then again, have the coalition caused less suffering? was there the same lawlessness and lack of security in iraq in saddams time compared to now? will coalition leaders be executed for crimes against humanity? NO
this is an example of victors justice. its an insult to my intelligence to be told the west is "civilised". dermy, coalisland, co. tyrone, ireland, Recommended by 109 people

BBC Have Your Say