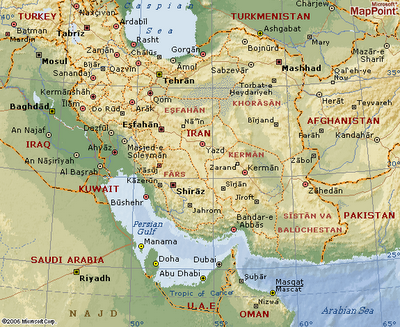 Frederick W. Kagan and others have released their outline, Choosing Victory - A Plan for Success in Iraq. In his executive summary of the 55 page document he writes:

Victory is still an option in Iraq. America, a country of 300 million people with a GDP of $12 trillion, and more than one million soldiers and marines can regain control of Iraq, a state the size of California with a population of 25 million and a GDP under $100 billion.

Victory in Iraq is vital to America’s security. Defeat will lead to regional conflict, humanitarian catastrophe, and increased global terrorism.

Iraq has reached a critical point. The strategy of relying on a political process to eliminate the insurgency has failed. Rising sectarian violence threatens to break America’s will to fight. This violence will destroy the Iraqi government, armed forces, and people if it is not rapidly controlled.

While the Kagan-led effort is needed and welcome, unfortunately, like the Baker- Hamilton Iraq Study Group report, it is incomplete and ignores the underlying pathologies afflicting the world of Islam as well as the Iranian nuclear threat.

The Irrational Hatred of Zionist Israel.

Taught by the Koran to hate Jews, devout fundamentalist Muslims throughout the umma share an irrational, religious hatred of Zionist Israel. Since before 1947, despots and potentates throughout the Islamic world have allowed or encouraged the Imams to fan the flames without regard to the self-immolating characteristics of hatred. On September, 11, 2001, Osama bin Laden set in motion the series of events which will soon change Islam and the way its devotees view the Koran and day by day, as Iran works fervently to obtain a nuclear weapon, time runs out for an intervention to cure the fundamentalist insanity propelling Islam to destruction.

While the EU3 and the I.A.E.A. have been spending words and empty threats, the President of Iran, Mahmoud Ahmadinejad has been buying time so that the Iranians could continue feverishly working on their nuclear program. Like Hamas in Gaza, and Hesbollah in Lebanon, Ahmadinejad has made no secret of his hatred or his intentions. His fiery rhetoric has been calculated to excite the insane expectations of the umma as he sets the stage for Armageddon.

Complying with Koranic instruction, he has sent letters to to Angela Merkel and George Bush asking the West to submit to Allah and he has warned them of the consequences if they do not.

"We increasingly see that people around the world are flocking towards a main focal point - that is the Almighty God. My question for you is, 'Do you not want to join them?"

He has also shown his fellow Muslims that he is a “reasonable man” but it is the Jews and that have conspired and plotted and destroyed.

Could [9/11] be planned and executed without coordination with intelligence and security services - or their extensive infiltration? Of course this is just an educated guess. Why have the various aspects of the attacks been kept secret? Why are we not told who botched their responsibilities? And, why aren't those responsible and the guilty parties identified and put on trial?

Ahmadinejad knows that these messages resonate throughout the Islamic world which, with its prayers and deeds has been working to destroy Israel and defeat the United States. Even the less devout or secular leaders of the Arab world, ambivalent toward the United States have been detached or delighted to watch as the United States led coalition of "infidel occupiers" struggle in Iraq and Afghanistan.

Apparently, Kagan and company think that Ahmadinejad is a lying blowhard and Iran is more than two years away from first developing their nuclear arsenal. Otherwise, why would they waste their time with this plan for victory?

It is unreasonable to expect victory in Iraq with the insanity in Iran and throughout the Islamic world.