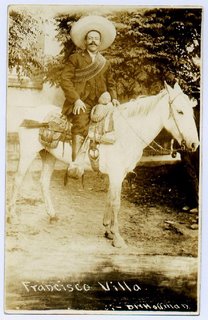 LAREDO, Texas - For residents of this border city, it was a terrifying yet familiar tale: Three more Texans vanished in the dangerous Mexican countryside across the Rio Grande, abducted amid reports of escalating violence between warring drug cartels. The weekend kidnapping of a prominent Laredo businessman and two other Texans was the latest of dozens of abductions in recent years that have more people here steering clear of the once-accessible border.

"Well, everyone is scared," said Antonia Ramirez, a 68-year-old Nuevo Laredo resident who was shopping in downtown Laredo on Thursday. "You hear about it on the news all the time. It's worse than a few years ago."

The Mexican authorities have lost control on their side of the border. Drug runners and other assorted banditos wield the upper hand as they gun down police chiefs as quickly as they are appointed, heavily armed para-military groups escorting drug smugglers have "shot it out" with out-gunned US law enforcement authorities. The violence has begun to spill over into the United States; 27 Americans have been kidnapped since Aug 15. Residents of Laredo live in fear and why this border violence isn't of more concern nationally is a mystery. Instead of enforcing the border, our government is prosecuting its own Border Patrol Agents for shooting an escaping drug smuggler in the butt. Border Patrol agents are demoralized because the government will not prosecute cases. What will it take to make the US Government act responsibly?

The Constitution doesn't not prescribe many duties and responsibilities for the Federal Government but repelling invasions and maintaining a Navy for defense are among the more important roles. The Federal neglect of the southern border is now approaching the level of "dereliction of duty". Someone should be impeached.