Rumsfeld's Hell in the Garden of Good and Evil, Washington, DC. 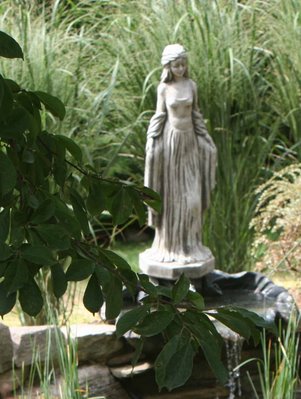 Last night, NPR featured a story on Donald Rumsfeld’s last day at the Pentagon. It was about his emotional farewell speech to employees. Rumsfeld said that the worst day of his nearly six years as secretary of defense occurred when he learned of the Abu Ghraib prisoner abuse, but something far more sinister caught my attention.

There was mention of Rumsfeld meeting with his lawyers regarding his possibly being involved with litigation over some of his decisions. Possibly? With a Democratic Congress, possibly?

Rumsfeld’s worse days are ahead of him. His hell will soon begin and be worse than Abu Ghraib. Washington will do what Washington does best. Slime. It will show its true and hideous side. It reminded me of someone else twenty years ago.

On the upper hillsides that make Georgetown is an academic research facility, library and museum owned by Harvard University. It is also an exceptional arboretum and named Dumbarton Oaks. It is located across the street from the Danish Embassy. I had business at the embassy and a later appointment in Georgetown. After my embassy visit, I crossed the street to enter Dumbarton Oaks. It was early and I had some time to relax and prepare for my next meeting. One of the many features to the park is an impressive and extensive rose garden. The early Washington summer had not yet diminished the roses, but they were slightly off blush. I found a bench in the shade to review my notes.

I opened my “Day Timer”, a pre-technology personal analog calendar book bound in pigskin, an address book. Under the “O” was a name that had seven phone numbers all scratched out and a new eighth that wasn’t. Robert Owen changed numbers often.

Although I had spoken with him on more than a few occasions, I did not know him to see him. We were to have lunch and I had some documents for him. He was now working out of a senator’s office. I had not heard of Senator Dan Quayle, but he was from Indiana and other than the “Indy 500”, you do not hear much about the place. However, I saw the connection. I finished my notes and left for the restaurant.

Owen was tall with sandy blondish hair, bookish with glasses. He was a pleasant, well-spoken and affable guy. I liked him. We had a drink, lunch, and discussed our mutual friend. I kidded him about his changing phone numbers so often and asked if he had trouble holding a job. He understood my humor. After more conversation, I chided him, “Just who do you work for?” he smiled and did not answer. That was the answer I expected.

Over the next few years I would have other meetings and calls with Owen. He was a decent and honorable man doing a necessary job. In the true garden of evil, Washington DC, it is not enough to do a good job. Owen would pay for the decision to do public service and face financial ruin protecting himself. He would face Senator John Kerry.

I was to get an education about viciousness and the evil of Washington, DC and the real slime behind the beautiful buildings and majestic monuments. I would get a peak at the personal hell that public service can bring to the lives of decent men doing their job. Rob Owen was like a lot of good men who to do what we ask of them, our dirty work. Had we a crystal ball in that Georgetown Restaurant we could have seen a glimpse at Rob Owen’s future:

OWEN. I just assume that he did. I think at one time he did say that he talked to his friend at DEA. Drugs was a concern because of what we talked about earlier with Hull, because of the poor reflection it would have on the resistance.
My notes or my memos to him talked about narcotics and he was concerned about it, again because of the image problem and because it did damage.

Q. In your contracts with John Hull and with contra leaders, including Calero, what was their attitude about these stories about drug trafficking?

OWEN. When I talked to Calero about it, he was concerned. He thought it was bad for the image, bad for the program. Hull was constantly being targeted, certainly in the Honey and Avirgan suit that he was involved in narcotics trafficking. and Renee Corvo and others were involved. As I stated earlier in the four years that I have known John Hull, I would find it hard to believe that he was or is involved in narcotics.
Q. Did you meet with Eden Pastora?

OWEN. On four or five occasions.

Q. Did you know Carol Prado?

OWEN. Yes. In one of my memos, I said I was concerned that he was involved in drug trafficking out of Panama.

OWEN. He was Pastora's pilot. There was concern about

Q. After [INFORMATION BLACKED OUT] April 1984, what happened to Pastora's planes and equipment?

OWEN. A couple of the ended up going eventually to the FDN. He had one or two -- I think there was one that crashed on the Pacific Coast, another was flown into a mountain taking off [INFORMATION BLACKED OUT] with one of his former pilots.

Q. Do you know of any support that Pastora and his group was receiving from the United States Government via CIA or North or Hull [INFORMATION BLACKED OUT].

OWEN. No. There was a conscientious decision not to support Eden Pastora.

Q. Have you heard of Gerardo Duran?

OWEN. I think he may have been involved in narcotics trafficking, but I don't know where that comes from. I may be slandering the man.

Q. What about [INFORMATION BLACKED OUT].

OWEN. I have heard the name. And I right now can’t remember in what context.

Q. He is a Cuban-American from Miami -- does
that refresh your recollection?

You get the picture. Good men get smeared by the illegal actions of a few bad actors. Political opportunists will destroy and ruin any and all to make their own careers. Save a little sympathy for Donald Rumsfeld, and other good men for the hell they will face. Look to see the pathetic hideous Kerry once again trying to gain attention in his quest to be President. It will be another day in the Washington garden of good and evil.