On the road to victory in Iraq? 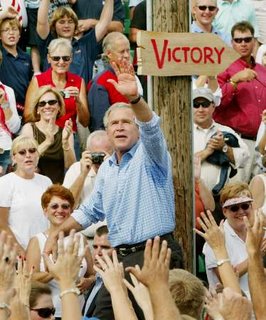 Bush looked into Defense Secretary Robert Gates’ soul and saw a surge strategy. He is going to be rushing more Americans into Iraq, while the smart Iraqis are leaving. We have one hundred and fifty thousand skins in the game and the Iraqis have taken one and a half million people off the table. They continue to leave Iraq at a hastening pace.

The “national unity government” formula is dead on arrival. For fifteen seconds there seemed to be a glimmer of hope for a new start but the Iraqis who are in the know are voting with their fresh new passports. The esteemed, blessed seer of seers, the revered Grand Ayatollah Ali al-Sistani in Najaf must be counting heads and is seeing that there are more Sunnis leaving than his own bicycle chain swinging Shiites. He is holding the course. No political show of unity for his anointed holiness.

An AP source reports that:
“An official close to al-Sistani, who spoke on condition of anonymity because he was not authorized to speak to the media, said the cleric “will not bless nor support any new bloc or front. He only supports the unity of the Shiites.”

Anyone with a brain and fifteen cents worth of street smarts should be able to see where this is going. Iran, the Sunnis and the radical militias will all want to see the US locked into a battle with the Sunnis and the Shiites. They all have an interest in seeing it going from bad to worse for the US. New American troops will be in a war with the Shia militias. To this point it has been a Sunni show. Almost all the IED’s and US casualties have come from the Sunnis. The U.S. has faced a Sunni insurgency. With Bush as weak as he is in the US, it is a strategy that makes sense for all his enemies to play against him.

If Sistani is telling you to leave the militias (Shiites) alone, smile, bow, and walk slowly backwards towards the door.