Democrats Tying Down the Pentagon 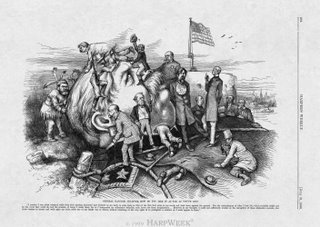 This 1880 Harper's Weekly illustration portrays Democratic presidential nominee Winfield Hancock as tied down and controlled by "disreputable and dangerous forces of the Democratic party." Nast translates a widely recognizable motif from Jonathan Swift's Gulliver's Travels (1726) into a commentary on the 1880 presidential race. General Hancock appears in uniform as Gulliver when shipwrecked, he awakes to find himself bound by the miniature Lilliputians. .
An article appeared in today's dead tree edition of my local newspaper which I suspect may foreshadow the next few years, especially now that Democrats control Congress.

High on his to-do list will likely be the enormous task of cleaning up the Pentagon's finances that outside auditors lambaste as so chaotic that no one knows how much money is being spent on defense at any given time.

Rosenberg is reporting that the during Gates confirmation hearing it was evident that the Pentagon's budget woes are a bi-partisan concern shared by both Congress and the Executive office:

Senator Elizabeth Dole, R-N.C., told him that the White House's Office of Budget thinks the Pentagon's financial management systems are in such a mess "that independent auditors still cannot certify the accuracy of the financial statements."

"I'm interested in what plans you may have to address what appears to be a severe problem," she said. 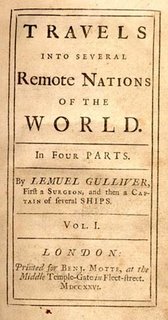 The Senate committee is very concerned about the Pentagon's accounting and wants Gates to give it "priority attention." Senator Carl Levin, D-Michigan, incoming Chairman of the Senate Armed Services Committee told reporters that he will make financial oversight a top priority. No doubt he will be especially interested in the "surging costs of new weapons projects."

Of course, financial responsibility and proper accounting are absolutely required of any government agency but Carl Levin's oversight of the Pentagon is not a comforting thought in today's world. Knowing what the Democrats have done to the U.S. intelligence community creates a lot doubt about what they will do to the Pentagon and its ability to project U.S. power into the "remote nations of the world."

Let's us hope that the new Secretary of Defense, Robert Gates will not, like Gulliver, be tied-down by bean-counting Lilliputians and "disreputable and dangerous forces of the Democratic party."