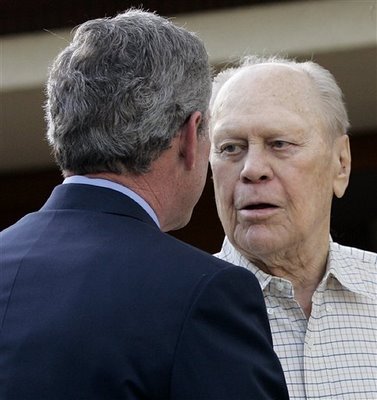 Now I am sad. I made a mistake in my youth and I regret it.

When Gerry Ford ran against Jimmy Carter, I joined the ranks of many foolish Americans and exercised my right not to vote, or has I have come to realize, I was stupid.

I was half right but all wrong.

Over the years Jimmy Carter showed himself to be the classless little petulant sanctimonious twit that he is. My decision not to vote for him was correct.

Not voting for Gerry Ford was regrettable.

Bob Woodward at the Washington Post has published parts of an interview that the former president gave in July 2004.

Ford would not allow the interview to be published while he lived. In it he discussed the Bush decision to take the US into war with Iraq. Ford said, “"I don't think I would have gone to war," The Post article reports:

… "very strongly" disagreed with the current president's justifications for invading Iraq and said he would have pushed alternatives, such as sanctions, much more vigorously.

In the tape-recorded interview, Ford was critical not only of Bush but also of Vice President Cheney -- Ford's White House chief of staff -- and then-Defense Secretary Donald H. Rumsfeld, who served as Ford's chief of staff and then his Pentagon chief.

"Rumsfeld and Cheney and the president made a big mistake in justifying going into the war in Iraq. They put the emphasis on weapons of mass destruction," Ford said. "And now, I've never publicly said I thought they made a mistake, but I felt very strongly it was an error in how they should justify what they were going to do."

… Ford took issue with the notion of the United States entering a conflict in service of the idea of spreading democracy. "Well, I can understand the theory of wanting to free people," Ford said, referring to Bush's assertion that the United States has a "duty to free people." But the former president said he was skeptical "whether you can detach that from the obligation number one, of what's in our national interest." He added: "And I just don't think we should go hellfire damnation around the globe freeing people, unless it is directly related to our own national security."…

… Describing his own preferred policy toward Saddam Hussein's Iraq, Ford said he would not have gone to war, based on the publicly available information at the time, and would have worked harder to find an alternative. "I don't think, if I had been president, on the basis of the facts as I saw them publicly," he said, "I don't think I would have ordered the Iraq war. I would have maximized our effort through sanctions, through restrictions, whatever, to find another answer."…

It is a fascinating article. President Ford deserved more recognition for the man he was. He had common sense and was cautious and understood the nature of the office in which he was privileged to serve. He did not avoid making tough decisions and firing people that did not serve him well. I need not add comment about my increasing revulsion at some of the Presidents who have served after him. Read the Washington Post .