Saddam taunted by Shiites, tell them to "go to hell" and dies. 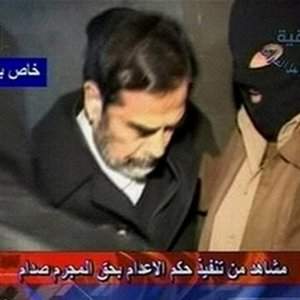 Watch this first. Video of Sadaam hanging while being taunted by Shiites. hat tip : Habu

Saddam being hanged and taunted

ABC is reporting this:

"Several hours after Saddam Hussein was hanged this morning in Baghdad, the state-run television channel, Iraqia, began to run edited video, without sound, of the run-up to the hanging. The video shows Saddam being guided up the steps to the top of the gallows, a scarf being put around his neck and then the noose placed over his head and tightened on his neck. Then it stops. This footage, about a minute long, was played and replayed over and over during the day, and quickly found its way onto all major television stations around the world.

Later this evening, another video of the hanging popped up, this time being shown on Al-Jazeera and Arabiya, two Arabic TV channels based in the Gulf. The new video was of poor quality, was very jerky, and had clearly been shot on a cell phone or some similar device from below by one of the two dozen witnesses to the event. It also had sound. The picture it gave of Saddam’s last moments was very different from the edited, silent version that the Iraqi government had released earlier.

There are five men in black face masks who are visible on the gallows platform around Saddam, acting as guards. As they guide him towards the trap door and put the noose over his head, they start chanting religious slogans with the names of Moqtada al Sadr (the head of the Mahdi army, accused of organizing death squads against Sunnis) and Baqr al Sadr (the father-in-law of Moqtada). Saddam, a Sunni, is outraged at this last-minute provocation, and tells them to “go to hell.” This is generally where the two TV stations cut the video, but on at least one occasion that we saw, Arabiya allowed the video to keep rolling: The cell phone camera is jerked down to the ground, as if the person holding it had to conceal the camera, then it is slowly raised up to Saddam again, and suddenly his body shoots down through the trapdoor. At this, the Arabiya anchor came on and made a scissors symbol with two fingers with a mischievous grin on his face, as if to say that they really shouldn’t have shown that, but so be it. A cynical voyeuristic ploy, nudge nudge wink wink…

However, the impact of this video could be quite significant. First, it will reinforce Sunni suspicions that the execution of Saddam was merely an act of Shiite revenge for decades of repression under Saddam. The building where the execution took place was expressly chosen because it was once used as a detention center by a division of Saddam’s secret police that was focused on the Shiite Dawa party. Some of the witnesses whom the government invited to the execution had themselves once been tortured in that same building. Indeed, Prime Minister Maliki, who signed the execution order the day before the hanging, is a long-term member of the Dawa party and had himself been sentenced to death by Saddam back in 1980 before fleeing the country.

Worse, it will also reinforce the fears of Sunnis that Maliki’s government is beholden to the Mahdi army, Moqtada’s militia. Executions are generally expected to be solemn affairs –- certainly not opportunities for thugs to score some final sectarian points before the “enemy” is disposed of. The video itself seems quite distasteful –- but it is informative to the extent that it reveals the political baggage that the current government carries on its shoulders. It does not add up to a pretty picture."