Iraq is nothing compared to the prairie fire spreading over Latin America. 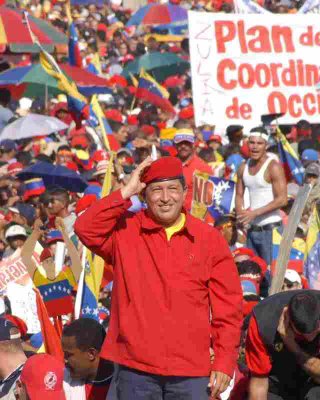 While we are obsessed with the mission to bring Democracy to Iraq and the Middle East, we may have missed something more important and relevant to our own well-being and future. Latin America is turning a hard left.

In Latin America the revolutionary impulse flourishes, Cuba, Venezuela, Brazil, Argentina, the Frente Amplio (Broad Front) in Uruguay, Pachakutic in Ecuador, Evo Morales in Bolivia, the FARC and ELN in Colombia, the FMLN in El Salvador, in Mexico, the Zapatistas and the smoldering resentments of the supporters of Andrés López Obrador are all part of a mix that will affect the United States for the next fifty years. The Sandinistas are even back in power in Nicaragua. Nowhere on the entire planet is socialism and communism making more gains than in the Americas.

It is not just a passing fad. It is now structural and gaining a momentum of its own. While we spend untold billions on airport security looking for Islamists, millions of undocumented Latin Americans are entering the United States. We have no idea who they are, their criminal history or their intentions. Yesterday Hugo Chavez won another six-year term with 60 % of the vote. When was the last time an American president won sixty per cent? How did he get that level of support? It is not through a pithy slogan. There is no Spanish version of "stay the course." It is a process known to Marxists since they came into existence. It always includes the schools, health care and the basic necessities of life.

The lessons taught by dedicated Marxists will stay with these children their entire lives. Many of those indoctrinated and converted will bring their ideology to the United States. Big city and small town school districts, already controlled by the progressive left will be fertile ground for neo-Marxists.

For a little flavor as to how the process works, how the Left is winning in Latin America, and what they have in store for the rest of the Americas, read the last part of an interview with one of the many architects of the New Left in Latin America:


If you had told someone a decade ago that the educational system was going to admit 340,000 new university students in three years, they would have said it was strictly impossible. But the Bolivarian education system has done much more than this: in education and in other areas the revolution makes “leaps forward” that exceed what was previously imaginable.

When the extraordinary becomes quotidian, then we are in a revolution – this is something that Che said. When we alphabetized a million and a half people in one year, that was extraordinary. Compared to the fact that, before, 8000 people were alphabetized each year – compared with that, well the numbers now are extraordinary. That is quantitative reading – achieving the incorporation of everyone – but there is also a qualitative reading. The misiones are not only a success for the government: they are a success for and by for the people. The misiones exist because there is a commitment on the part of 1.5 million people to learn how to read and write. That is a qualitative value. In the our most successful year between the election of Chávez in 1998 and 2003, we incorporated 37,000 into higher education – we were proud because in 1998 it was 12,000. Yet in November of 2003, 90,000 people were incorporated into higher education. How was that done? Because we had the commitment from local authorities, the commitment from the state, the commitment from the people. The people supporting the people, that is the success of the misiones. That is the most important qualitative success – and it is experiential. The people educating the people, the people saving the people. The greatest accomplishment of Chávez has been his empowerment of the people. The people are taking a leading role here. Of the Cuban doctors who came for Barrio Adentro, more than half are hosted by families. Can you imagine the infrastructure that would be needed to host 10,000 doctors near their Barrio Adentro module? But we had 10,000 Venezuelan patriots who said that they had a room in their home for the doctors, or had a spare room that could be turned into a consulting room for a Barrio Adentro. In the educational misiones, their success is not because we produce the books and give them free to our students – that is our obligation. The success of the misiones is due to a will on the part of the people to overcome, to improve themselves and their communities. And it is the obligation of the government apparatus to legitimate that effort.

No matter what, the government will be there to support the people. Something new and important is the Ley de consejos comunales. The power in the hands of the people. I now wonder, for instance, why is it that the consejos comunales are not the ones telling us who should attend Sucre. If we think that the neighbor does not care enough about his community to know who should go to school, we are wrong. We cannot take students into the higher education system based solely on the numbers of their exams or the school they come from. Of the 1000 that graduated at the Bolivariana recently, 600 of them would not have made it on the number, because they did not receive a privileged education. And yet all of them are going back to their communities and working there.

We are not yet in the time of the harvest. We have planted and we are seeing the first plants sprout, and we are watering them. The first shoots will make a revolution – that will be the harvest. If you ask me what is the most important qualitative thing – I will say, to have, as a government, believed in the power of the people. Believing that the people could create a Misión Sucre space or a Barrio Adentro in someone’s living room. Believing that it was the people’s initiative to do so. This is what makes our revolution. And the attacks on the revolution aim to discredit with a numerical algorithm what is being done, on an experiential level, with the people. But in addition to that, we are doing it in terms that can be measured numerically. The worst thing about those who are denigrating the misiones is that they are denying that the people are a historical subject that is capable of carrying a revolution forward.

We are not in socialism yet. We are just beginning to walk the path that will take us toward a 21st century socialism. That is why Chávez talks about 2021 and 2030 – because he is conscious of the scope of the goals that have been set. From 2002-2003 – the year when this process was radicalized – to here, this is not enough time.