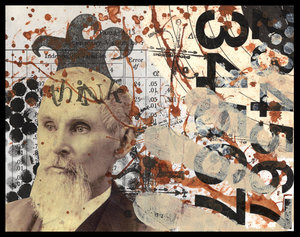 I was in a bad mood this morning. Maybe the "coffee buzz" combined with the turn of events made me edgy and on the eve of 2007, I had a "crappy" outlook on life. I thought, "This world won't ever get any better. Man is the same as he ever was and that's not good."

I'm feeling better now, thanks. Living may get tedious but, as they say, it beats the alternative.

This morning, a friend called asking for help. She wants me to talk to her son about the war in Iraq. She is about 25 years older than me and I think her son is a few years younger. She is distressed because her son is opposed to the war. She is a conservative Christian and is disturbed by his "liberal opposition" to the war. I want to tell her that it's irrational to try to reason with people deep into BDS. I want to tell her that our side is at a low point in the "long war" and are even beginning to argue amongst ourselves. Do I tell her that the other side may have been right about the futility of the endeavor? Do I tell her that Iraq has been mishandled and now there doesn't appear to be an upside? Do I tell her that for us (the US) it's over in Iraq. Even if Bush elects to surge US troop strength, the Democrats won't go along with the plan. Should I tell her that the best thing we can do is leave the inevitable bloodshed to the Iraqis while those of us who see the danger of militant Islam regroup and rethink our long term strategies in the face of world opposition. Should I tell her that the other side only wants to see us eat crow, so it's best to say little or nothing while they enjoy their turn at hubris and schadenfreude?

Should I remind her that when we place our faith and trust in mankind including our fellow conservatives, we will always be disappointed? Or do I tell her that the sun will come out tomorrow and that we should all just stay on the sunny side of life?