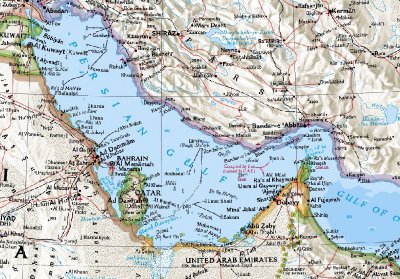 Captains Battle Hostiles and Elements
as Ship Runs Aground in Persian Gulf
The flagship of the Coalition, “The Democracy Endeavor,” has run aground in the treacherous Persian Gulf shoals of Iraqi violence. Captains Bush and Blair are racing against time in a desperate attempt to assess the damage and search for a way off the shoals while fending off unrelenting Islamic savages, political pygmies and packs of rabid press dogs. To compound their consternation, much of their precious “freedom and democracy” cargo has been looted and is being buried in Middle Eastern sands. If they are unable to free the ship all their efforts to date will have come to naught.

Since September 11, 2001, George Bush and Tony Blair have led a coalition of the willing on a voyage to find and defeat terror and to deliver freedom and democracy into far flung corners of the world. Against all odds and the sustained efforts of an uncooperative Press and the formerly humanitarian left, the two men have navigated through uncharted waters in their quest to affect a Herculean paradigm shift in the Islamic world. Through the course of their historic voyage, the two men have endured many dangers while enjoying only a few moments of celebration. Their coalition armies routed the enemy and deposed the oppressive tyrant, Saddam Hussein. They rid the world of his psychopathic sons, Uday and Qusay and have endured the asymmetrical attacks of his Baathist minions. They have contended with the al-Qaeda jihadists. They have suffered the deceit of Sunni and Shia alike as American blood and treasure was spilled on the god-forsaken sands of Babylonia. They have endured the Gramscian torture calumnies dispensed by the world’s “humanitarians.” They have patiently explained that theirs is not a crusade against Islam. The Commander-in-Chief was mocked and ridiculed at home and abroad for his “mission accomplished” thank you to the sailors returning home aboard the USS Abraham Lincoln. They have been abandoned on the battlefield by “cut and run,” opportunistic political opponents. They have been poorly served and undermined by their Intelligence agencies and the Department of State. And although they have made mistakes and miscalculations along the way, Bush and Blair have remained steadfast in their mission.

Although the situation is grim and future prospects bleak, the two men insist that "all is not lost" and the final chapters of the saga have not been written. Perhaps eventually, by the most roundabout series of events, the vision of the two leaders will be vindicated, but for now, the political winds have shifted, the peace effort has foundered, the sharks are circling and a storm is gathering on the horizon.