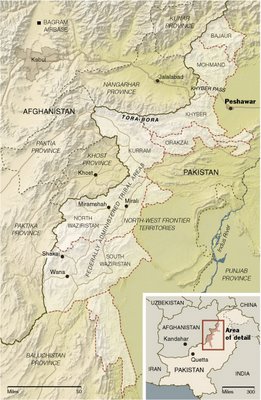 Nature abhors a vacuum and so do the Islamists.

An article in today's New York Times, by Carlotta Gall and Ismail Khan confirms other reports that the Taliban and al-Qaeda are taking advantage of a peace deal with Pakistan to consolidate power and control in the tribal regions of north western Pakistan. All made possible by the generous donations of fellow muslims in the Persian Gulf.
Gall and Khan write that anonymous Pakistani officials admit that the agreement was a bad deal for the Pakistanis in that it has no teeth for enforcement.
This is encouraging in that Musharraf can make the case to his people that the other side reneged on its word. Eventually, he'll have to, at the very least, look the other way as NATO planes take care of business in the western provinces.
Jihadis are beginning to operate in the area and are using the same tactics used by the "ali babas" in the Anbar provinces of Iraq.

The area is becoming a magnet for an influx of foreign fighters, who not only challenge government authority in the area, but are even wresting control from local tribes and spreading their influence to neighboring areas, according to several American and NATO officials and Pakistani and Afghan intelligence officials.

This year more than 100 local leaders, government sympathizers or accused “American spies” have been killed, several of them in beheadings, as the militants have used a reign of terror to impose what President Pervez Musharraf of Pakistan calls a creeping “Talibanization.” Last year, at least 100 others were also killed.

While the tribes once offered refuge to the militants when they retreated to the area in 2002 after the American invasion of Afghanistan, that welcome is waning as the killings have generated new tensions and added to the region’s volatility.

The foreign fighters in the area include Afghanis, the Taliban, Uzbek and other central Asians, and of course Arabs including Osama and Dr. Al. Suicide schools are doing such a lively business that some volunteers have been turned away due to a lack of class space. The Afghan Intelligence reports that some 500 to 600 students are currently enrolled bombers have in Suicide U. of Pakistan.
Also mentioned in the article are a cast of unsavory al-Qaeda and Taliban characters including the infamous Mullah Dadullah, the fiery one legged "spiritual leader" from Afghanistan.

The other, for the same reason, is Mullah Dadullah, a ruthless Taliban commander from southern Afghanistan, who has emerged as the main figure in the resurgence of the Afghan Taliban.

The one-legged Dadullah — he lost a leg in fighting — has a flamboyant if cruel reputation. He narrowly escaped capture in northern Afghanistan in 2001, often gives boastful interviews to news agencies, and is known to have personally ordered the killings of aid workers. His latest announcement, made in a phone call to Reuters, was that the Taliban had infiltrated suicide bombers into every Afghan city.

So the stage is being set for next seasons "Afghanistan Summerstock, 2007." The casts are busy preparing themselves and by all accounts, next season's production of "Tora, Tora, Bora - Kamikaze in Afghanistan" promises to be a "rocking and rolling" extravaganza that will blow away audiences and critics alike.