Shout out your 2007 predictions. 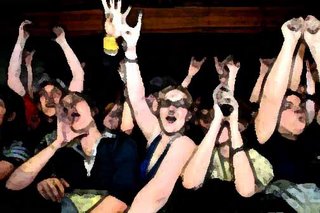 Read my lips. These are not my predictions.

Some I agree with and some I do not. They represent various points of view. Now we all know that the Elephant crowd is a group with small egos and are relatively un-opinionated. Most of you are reticent to say what is on your mind, but let's hear it.

What are your predictions for 2007?

"Although my guess is as good as yours at this point in the game, I do have some ideas about who will make it to the primaries, and who will become the standard bearers of their parties. For the Democrats, the top three candidates are Hillary Rodham Clinton, Vice President, Al Gore and Barack Obama. All three have solid name recognition, plenty of money (with the exception of Obama), and enough political experience. Although, they each have their problems (Clinton is a left-leaning woman who stirs up vats of animosity. Obama is a bit too young and inexperienced. Gore is steadily reinventing himself.), these three will be the key democratic candidates in 2008, and in the end, will be a photo finish horse race between Clinton and Gore for the nomination. The Democratic winner: Al Gore.

The top three Republican candidates are John McCain, Mitt Romney and Rudy Giuliani. These three guys bring some serious star power to the game, and despite some minor flaws (McCain consistently upsets his conservative base. Romney’s faith and immigration problems have stirred up a lot of fervor. Giuliani’s three marriages and other relationship problems have been well chronicled.), each could become our next president. The Republican winner: John McCain.

So, the way I see it, in November 2008, you will have a choice of John McCain or Al Gore as the next U.S. president."

Prediction for 2007: "Home prices will stabilize in most parts of the country and even perk up a bit overall. At the same time, foreclosure rates will continue to rise as homeowners who used risky low-interest adjustable rate mortgages have trouble making payments as their rates adjust upwards."

."Bush, now a desperate Undecider, will compel a military fig-leaf acquiescence and order more troops for a few-months surge. Sadly, it will only prove his Joint Chiefs of Staff were right. Only by starting to withdraw troops can the United States jolt Iraq's government so its Shia-installed leaders will demand the disbanding of Shia militia - and that is the only way Iraq can have even a chance of controlling its own destiny."

"In this context, Muqtada al-Sadr, now the most powerful political leader in Iraq, will continue to lead Iraq’s opposition to Iran. Sadr, unlike Hakim, is opposed to Basra’s independence. Sadr’s power base is in Baghdad, not southern Iraq and Basra. Iraq’s loss of Basra would leave Baghdad’s Shi’ites and Sadr isolated and vulnerable. The result would be a coup for Iran and Hakim and a disaster for Sadr and his allies.

While Sadr will be leading Iraq’s domestic resistance to Iran, Russia will lead the international resistance to Iran. Russia is already blocking Russia’s access to Central Asia via the Shanghai Cooperation Organization. Russia is also blocking Iran’s influence in Turkmenistan, where a political transition s underway and Iran is attempting to make inroads. Moreover, Russia is also concerned about rising Iranian influence in the Middle East via Hezbollah and Hamas. Russia is now cooperating with Syria to moderate Hezbollah, and appears to be having success with Hezbollah’s call this week for a negotiated settlement to Lebanon’s problems. Hamas, however, is unlikely to moderate its extremist policy. Iran has just announced it will for the first time be providing military training to Hamas within Iran.

Turkey will be Russia’s top partner in a Contain Iran policy. This is because Turkey regards the breakup of Iraq into two or more states including Kurdistan as presenting an unacceptable threat to Turkey. Prime Minister Erdogan will mobilize Turkey’s own forces against Iran and Kurdistan. Turkey will also mobilize the Arab states including Jordan and Syria.

Next to the US, Al-Qaeda will be Iran’s most important ally. This is because Al Qaeda, like Iran, wants Iraq to break up into two or more states. From Al Qaeda‘s perspective, an independent Kurdistan and (Shia) Basra will be followed by an independent Sunnistan in Al Anbar province, bordering Saudi Arabia. Al Qaeda intends to dominate this new Sunni state, which would replace Afghanistan as a staging area for terrorism. Moreover, with control of Al Abar province Al Qaeda would be well positioned to influence Saudi Arabia and influence developments in the Middle East as a whole, to Iran’s benefit."

"Tim Cockerill, head of research at Rowan & Co, reports: “We are overweight Japan. It has been disappointing since the market correction in May/June this year and small companies in particular have been hard hit; there is concern about the robustness of the consumer but the GDP numbers have surprised on the upside and exports have been strong. The labour market is under pressure and wages are expected to increase along with bonuses, the banking sector is a robust entity again and protection from cross-share holdings has all but gone, making companies much more shareholder friendly.

“All around the globe large-cap stocks offer good value compared with mid and small-cap stocks. Whilst this has been the case for at least 12 months there remains a strong possibility that they will outperform mid and small caps in 2007. If markets are weak, they may make only modest gains but that could be against a background in which mid and small caps lose value.

“Europe is often the laggard in the global economic cycle, with GDP growth less than that in the UK and US, but that view misses an important point. Europe offers stock-pickers huge opportunities from large-cap international companies to small cap stocks, it is under researched compared with both the UK and US; geographically it is diverse and with Eastern Europe on the door step Europe is well placed to surprise investors.”