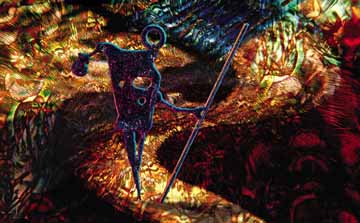 The release of the Iraq Study Group Report is an unmitigated disaster. The latest in a long series of missteps and mistakes since the invasion of Iraq three years ago.

The Baker-Hamilton group should never been allowed to form but with a sharply divided political climate and a raging foreign policy dispute between "realists and neo-cons," it was inevitable. With the release of the report and the President's deference to it prior to its release, America has just given the Islamists a new surge of hope. The Sunnis and al-Qaeda (aka "the ali-babas") are resorting to their standard MO used early in the insurgency before Falluja II. They ratchet up the intensity of their lies, rhetoric and propaganda for the international audience while the imams whip up anti-Americanism in the local population. Here's the latest example of the tactic.

The U.S. command said Friday's raid and airstrike killed 20 insurgents, but the association and the Iraqi Islamic Party joined a village mayor who alleged that the attack killed at least 19 civilians, including women and children.

On Saturday, about 1,000 residents of al-Ishaqi village in the volatile province of Salahuddin held a funeral for the 19 dead, shouting slogans such as "Down with the occupiers," "Long live the resistance," and "There is no God but Allah."

The Association of Muslim Scholars issued a statement condemning the attack that occurred on Friday, the day of worship in mostly Muslim Iraq.

The group of hard-line Sunnis, which has routinely opposed the "U.S. occupation" of Iraq, alleged that American soldiers entered two Iraqi homes, shot their large families to death, then planted bombs that blew up the buildings to make it look as if the Iraqis had died in a U.S. air strike targeting insurgents.

The association said 32 civilians died in the attack, including four women and six children.

"The association condemns the massacre and urges international organizations and the media to show the world the reality of the fake slogans about human rights and freedom used by the Americans," the statement read.

The Iraqi Islamic Party is part of a Sunni bloc in Parliament that controls 44 of its 275 seats.

In a statement Saturday on its Web site, the party called Friday's attack "a new massacre by the American occupiers" and said it happened when U.S. soldiers shot 32 civilians, including women and children, in two houses, then destroyed them in an air strike and claimed the victims were insurgents.

It was not so long ago that we read the intercepted Abu Musab al-Zarqawi letter where he despaired of waging jihad in Iraq. Today, reinvigorated Islamists are beginning a new campaign to drive out the infidel occupier, first in Iraq then throughout the middle east.
The middle east is a powder keg and events could happen quickly now. Syria and Iran, through Hezbollah, are deposing the Lebanese government. Hamas has reasserted that it will never recognize Israel which is faltering under Olmert. The Saudi Government has just rounded up another 130 suspected terrorists while the Saudi citizens send millions of dollars to the Sunni terrorists in Iraq. Iran has begun installing 3,000 centrifuges and its President Mahmoud Ahmadinejad claims that the international community is caving in to Tehran's demands. Nationalism and Islam are drawing Turkey away from the west. The United States is signaling "phased withdrawal."
Saddam Hussein's date with the hangman is drawing closer and in today's world of Arab satellite television, his execution could become the spark which finally ignites the middle eastern conflagration which George Bush has been trying to avoid all along. Oh well, we tried.