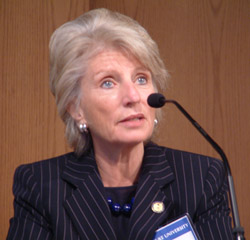 For six years we have heard many such criticisms from Democrats. There is a difference this time. They can do something about the things that they are criticizing.
Rep. Jane Harman, the ranking member of the House Intelligence Committee, told a gathering of the American Bar Association on Friday that the Bush administration's secret wiretapping program for suspected terrorists is illegal.

That statement to the ABA sets the tone for a sea change in the US strategy in the fight against terrorism. The Bush Administration with the Republican Congress has chosen to take on the jihadis by the use of intelligence and military action. The Democrats have been increasingly critical of the Administration seeming to prefer the use of the criminal court system.

Harman, once a supporter of the WOT, has become increasingly critical of President Bush's policies. Recently, her initial support for the Iraq war and her defense of the Patriot Act, has wained. Harman, who had been backed for the chairmanship by conservative Democrats, lost to more liberal Democrats. That was punishment for being too kind towards Bush policies.

Yet in her speech Friday, she said, "The term 'war on terror' is a misnomer," Harman said. "Wars are fought and won with military power; but the era of terror will not be ended by military force alone. In addition, the very designation of the struggle against terror as a 'war' enables the president to invoke commander-in-chief authorities to circumvent Congress, legal precedent and many constitutional requirements."

She repeated the usual nonsense about how our fighting style does not go down well in more refined circles:"How we treat people in U.S. custody says a lot about us and what we're fighting for. Holding detainees for years with no status determination, or using interrogation practices that go over the line, erodes our moral authority and ultimately harms our effort in the struggle for the hearts and minds of the moderate Arab and Muslim world."

So it looks like we will be doing a hearts and minds thing.

Although passed over for top billing, Harman, as a senior member of the Energy and Commerce Committee and the Homeland Security Committee can make havoc for Bush. She also had this to say:

"For the first time in 12 years, Congress will have the opportunity to conduct meaningful oversight. The days of 'just trust me' are over," she said. "The president should seek legal consensus on these questions."

I preferred her tone when in April she In her keynote address to the Duke Law conference on April 7th and 8th. "Strategies for the War on Terrorism: Taking Stock" , she said:

"It's not a ‘war on terrorism,' a notion which connotes a finite adversary against whom we will win or lose. We live in an era of terror," said Harman, likening the use of force against terrorists to "hammering jello".

"You can hit as hard as you want, but they just squirt out-disperse-and they reconnect with their networks in other locations, and literally plug into a wider and growing jihadist movement."

Good intelligence, diplomacy, and public diplomacy-"a broader public effort to win the hearts and minds of the Muslim world"-are also necessary to defeat the threat, Harman noted, before launching into a critique of the administration's policies towards detention and interrogation of terror suspects, the result of its "one-dimensional view" that the United States is embroiled in "simply a ‘war.'"

That talk then lost her the top job. The Democrats have something else in mind.