"Rise and shine, campers, and don't forget your booties 'cause it's cooold out there today." 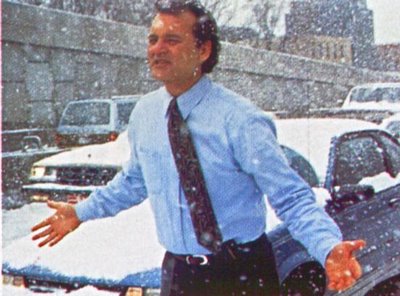 I have watched this movie twenty times. It mesmerizes me. For those that have not seen it, it is about a reporter who wakes up every day to the same voice on the radio and relives the same day regardless of what he does to change it. I read the latest new ideas on Iraq and it seems like another cooold day.

Is every day Groundhog's day in Iraq? How many times are we going to have to train and retrain the Iraq army and the police? Tell we campers, tell me it will change.

WASHINGTON — Tribal leaders and some political groups in the strife-ridden Iraqi province of Diyala are turning to terrorists and insurgents for protection rather than trust Iraqi soldiers and police, the commander of U.S. forces in that area said Friday.

"This sort of unity only worsens the sectarian divide and encourages further violence," said Col. David Sutherland, commander of the 3rd Brigade, 1st Cavalry Division. He spoke to reporters at the Pentagon by a satellite video connection from his headquarters near the city of Baqouba, northeast of Baghdad.

"Public perceptions of corruption, inequity and fear are the driving force behind support to terrorist organizations," Sutherland added. "These are not new problems in Iraq but problems that developed out of a desire for personal and financial gain."

He said he is trying to turn that around by putting Iraqi police through more rigorous training, placing more U.S. advisers in the Iraqi army and police units and through Iraqi efforts to recruit a police and army force that better reflects the sectarian makeup of Diyala, which is about 55 percent Sunni, 30 percent Shiite and 15 percent Kurd.

Sutherland said he is working out arrangements to expand the use of U.S. adviser teams with Iraqi security forces, reflecting the view of senior U.S. commanders that such an expansion can speed the development of competent Iraqi forces.

The Army, meanwhile, is considering ways it can speed up the creation of two additional combat brigades _ a move intended to expand the pool of active-duty combat brigades in order to relieve some of the strain on the Army from large-scale deployments to Iraq.

Under the plan being developed, the new brigades could be formed next year and be ready to be sent to Iraq in 2008, defense officials told The Associated Press. The officials spoke on condition of anonymity because the plans were not final.

The Army's chief of staff, Gen. Peter J. Schoomaker, told a commission Thursday that he wants to increase the half-million-member force beyond the 30,000 troops authorized in recent years. And he warned that the Army "will break" without thousands more active duty troops and greater use of the reserves.

Though Schoomaker didn't give an exact number, he said it would take significant time, saying 6,000 to 7,000 soldiers could be added per year. Schoomaker has said it costs roughly $1.2 billion to increase the Army by 10,000 soldiers.

Officials also need greater authority to tap into the National Guard and Reserve, long ago set up as a strategic reserve but now needed as an integral part of the nation's deployed forces, Schoomaker told a commission studying possible changes in those two forces.

"Over the last five years, the sustained strategic demand ... is placing a strain on the Army's all-volunteer force," Schoomaker said during a Capitol Hill hearing. "At this pace ... we will break the active component" unless reserves can be called up more to help, he said.

Accelerating the creation of two combat brigades would give the Army greater flexibility to allow units to return home for at least a year before having to go back to the battlefront. Brigades average 3,500 troops.

Since 2003, the Army has been restructuring in order to increase the number of brigades in each combat division from three to four. The purpose is to increase the pool of brigades available for troop rotations into Iraq and Afghanistan and to make each brigade more self-sustaining.

White House spokesman Tony Snow declined to characterize President Bush's response to Schoomaker's comments, but he said Bush "takes seriously any of the requests from the service branch chiefs."

Schoomaker's testimony and the new Army plans came as Bush continues his assessment of the Iraq war. Bush held three days of urgent meetings with top generals and other advisers. Federal agencies have presented their options to Bush and the White House National Security Council and are providing additional details and answering questions.

The military options being considered include a short-term surge in troops to stem the violence and an increased effort to train and equip Iraqi forces.

Speaking to reporters after the hearing, Schoomaker acknowledged that Gen. George Casey, the top commander in Iraq, is looking at several military options, including shifting many troops from combat missions to training Iraqi units.

OT Comment: Why would anyone name their kid Lolita or Bambi?