A French view on Islam and jihad. From: Spiegel online. 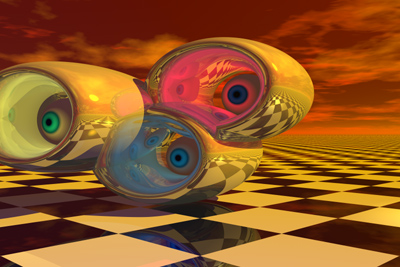 "An Ideological Bulwark against the West"

Gilles Kepel, a French authority on Islam, discusses the impact of 9/11, the prospects for democracy in the Muslim world and the way Europe treats its Muslims.

Gilles Kepel, 51, teaches at the Paris Institute of Political Studies and is considered one of the world's leading Islamic scholars. His publications include Jihad, Bad Moon Rising: A Chronicle of the Middle East Today and The Roots of Radical Islam.

SPIEGEL: Professor Kepel, the U.S. war against terrorism was supposed to bring democracy to the Islamic world. Instead, we see fighting spreading like wildfire. What has gone wrong?

Kepel: We're in a terrible bind. Five years after the attacks of 9/11, the jihadists and Western proponents of the war against terror engaged in a conflict, and turned us into their hostages. It won't be easy to free ourselves, because the conflict is not exclusively political. It involves emotional blackmail as well: both sides believe they need to win universal acceptance for their notions of truth, justice and morality.

SPIEGEL: Are we looking less at the clash of civilizations envisioned by Samuel Huntington than a battle for preeminence by two brands of fundamentalism?

Kepel: They are definitely two sides of the same coin. They're mutually interdependent; they feed off and reflect one another.

SPIEGEL: What is fueling the hatred in the Islamic world?

Kepel: The umma, the community of believers, feels threatened by what it sees as a modern version of the crusades, and therefore perceives itself as the antipode of the West.
SPIEGEL: Which means that holy war has to be fought right across the globe?

Kepel: Not necessarily. Remember, we lived with the Cold War for half a century. There were crises and challenges, but no open conflicts.

SPIEGEL: So you think the Cold War has given way to a new, radically different conflict between East and West?

Kepel: It might be more appropriate to talk about a conflict between the orient and occident containing elements of the northsouth divide. The attacks of September 11, 2001, radically changed our political paradigms, the way we interpret our world. Jihad on the one hand, and the war against terror on the other, are dictating the politicians' and television audiences' perspectives.

SPIEGEL: Unlike during the Cold War, there are no rival alliances, no geographical blocs aligned against each other.

Kepel: People may find that reassuring because it reduces the risk of a worldwide confrontation. Despite the dreams of some Islamic prophets of doom, jihad simply isn't going to take the shape of an apocalyptic event, a "final solution." But this unstructured form of hostility, this political and military asymmetry, makes the situation exceptionally unstable. We no longer have a balance of terror between the two parties. Terror can strike anywhere, in New York, Madrid or London just as it can in Haifa or Tel Aviv.

SPIEGEL: Is it fair to equate jihad with terror?

Kepel: We all look at things from our own point of view. Jihad is a positive concept in the Islamic world, terrorism a negative idea in the West. The conflict is not only being fought out on the political and military fronts, but in the virtual realm of propaganda as well. Without TV and the Internet, jihad would be an alarming but marginal form of immoderation. Don't forget that European anarchists at the end of the 19th century tried to spark revolution by assassinating czars, kings and presidents. To no avail. After all, there was no Internet.

SPIEGEL: What fuels the fantasies of the Muslim masses in the virtual and very real worlds of jihad?

Kepel: A sense of identity with the suicide attackers, the martyrs. That's a completely new phenomenon for Islam. We saw the first manifestations - as both an ideal and a symbol - at the end of the 1970s with the revolution in Shiite Iran. The Shiites venerate Husayn, the son of the Caliph Ali and grandson of Mohammed. The third Imam, he was killed during an uprising in Karbala in 680 A.D. He became a symbol of the Shiites' mourning, their defeat, their resignation. The Iranian revolutionary leader Khomeini and his disciples transformed this icon of suffering into an aggressive martyr.

SPIEGEL: In order to overthrow the Shah's regime?

Kepel: Yes, and to help mobilize for the Iraq-Iran war.

SPIEGEL: Many of today's Muslims - whether they be Shiites or Sunnis - subscribe to the cult of martyrdom.

Kepel: That's right. The common link was their resistance to the Soviet Union in Afghanistan. That was the first time that holy war clearly emerged as the potential successor to the Cold War. In Afghanistan, a new identity was forged for the Islamic world - by religious ideologists seeking to create a homogeneous universe. Or, it might be argued, a bipolar universe with an Islamic bloc confronting the unbelievers in the West.

SPIEGEL: Back then, the United States supported the Mujahideen, hailing the Red Army's withdrawal as the beginning of the end of communist imperialism.
Kepel: That was indeed true. But the United States didn't understand it was walking into a trap. To militant Islamists, the expulsion of the Soviets was just the prelude to purging the entire Islamic world of infidels.

SPIEGEL: Today the United States is trying to remake the Islamic world in the West's image. Is the creation of democracies in these countries a realistic endeavor?

Kepel: The Americans view the democratization of the Middle East as the route to peace. They regarded the invasion of Iraq as a necessary first step. Many Muslims believed them, but the results haven't matched the expectations. As a result, the countries and factions that sided with the Americans have lost much of their credibility. We're currently trapped in a vicious circle with no hope of escape.

SPIEGEL: Do Muslims simply see the Western concept of democracy as a pretext for outside interference and intervention?

Kepel: In the Arab mindset, democratization may not be an exclusively negative term today. But it's associated closely with American policies and the occupation of Iraq. For radical Islamic movements, democracy means absolutely nothing. Similarly, they can't relate to the issue of human rights at all. From their perspective, there is no such thing as personal self-determination entailing inalienable rights and human dignity: there is only a divine law that divides humankind into believers and unbelievers.

SPIEGEL: In many Arab countries, radical Islamic parties would win any reasonably free and democratic elections. Won't the West have to recognize these results?

Kepel: The age of colonialism is over. Countries now control their own destinies, and the Europeans and Americans will have to work with elected governments - regardless of whether they like them. After all, the West has been very amenable to authoritarian rulers of a modern or secular cast, even those who have trampled human rights underfoot.

SPIEGEL: Is there a danger that the socalled moderate Islamists - the political mainstream, you might say - will be the main victims in our conflict with the extremists?

Kepel: When the jihadists of the Muslim world demand support because of events in Palestine and Iraq, they set the standards of truth, justice and morality. They capture the diffuse feelings of Muslims in words. According to their interpretation, the umma is under threat from the evil forces of the "crusaders." This enables them to erect an ideological bulwark against the West.

SPIEGEL: But that won't make the moderates follow the extremists' example and turn to jihad.

Kepel: Not necessarily. But since September 11, 2001, the logic underlying jihad - i.e. resistance against the unbelievers - has produced a mindset that compels everyone to subscribe to standards that are becoming increasingly crude, less and less differentiated. In some ways, the fundamentalists have secured a semantic preeminence, not least through their adept exploitation of the Internet. The more traditional imams and Koran scholars are being continuously forced to take a stand vis-à-vis the radicals - sometimes being more accepting of their standards, sometimes rejecting them. There is, of course, a real danger that the two sides will try to outdo each other, and that the situation will spiral out of control.

SPIEGEL: So the moderates are struggling to keep pace in a game whose rules are being set by the extremists?

Kepel: Unfortunately, that is often the case. The Muslim world is divided into two camps. The moderate forces present themselves to the West as mediators who can help reach compromises and avoid violence. At the same time, they offer their support to the fundamentalists by - for example - asserting that only they, the forces of moderation, are capable of driving the Islamization of society and implementing Islamic law.

SPIEGEL: Does that rule them out as political and diplomatic partners for the West?

Kepel: At the very least, any strategy of rapprochement through dialogue is a double-edged sword.

SPIEGEL: Does that apply to dialogue with the Muslims who live in our midst? The "Islamists" aren't just "over there." They are part of our society, too.

Kepel: That's what makes integration such a thorny issue. In my view, European Muslims need to enjoy the same rights as members of other religions. If Muslims here don't face ostracism, attacks and other dangers, religion will generally serve to further their social integration.

SPIEGEL: Really? We see a lot of conscious social isolation.

Kepel: Muslim citizens should never be classified according to their creed, origin, ancestry or culture. After all, I don't define my political or social position by reference to the Christian faith.

SPIEGEL: The multicultural society - in which ethnic and religious communities evolve in parallel - has fallen into disrepute. Rightly so?


Kepel: Following the murder of the filmmaker Theo van Gogh in the Netherlands and the attacks in London last year, questions about the multicultural model of society are undoubtedly valid. In truth, it is tantamount to apartheid. Initially it was seen as positive and well-meant; today we see its downside - distrust and even open hostility. The multiculturalism in "Londonistan" has strengthened the feeling among British Muslims that they aren't fully-fledged UK citizens.
SPIEGEL: But the French social model - a republican equality for everyone and a state that doesn't differentiate between religions and ethnic groups - isn't working either.

Kepel: You are referring to the suburban riots in France last November. In my view, these outbursts - paradoxically - were less a rejection of French society and more a demand for increased integration.

SPIEGEL: Could Europe become the birthplace of a modern and enlightened European breed of Islam, a model for the Muslim world beyond our borders?

Kepel: We don't need to give up hope yet. As I see it, a Post-Islamist period in Europe can only come about if Islamic and Western values prove compatible. But there's little evidence of that yet. We have to give "our" Muslims the opportunity to embrace the modern world - without any constraints. Young people of Muslim heritage who enjoy success in our society today - whether in culture, commerce or politics - will have no need to apply Islamic criteria when defining their identities.