2164th, aka Deuce, posted this comment on the previous thread. He should have saved it for a full post especially since he will be distracted with other business for a while. Personally, I think it deserves a rerun.

In the previous thread, at the end of the discussion, there was speculation about what went wrong in Iraq. It is worth a look because there were some very insightful comments. The question is a good one and unfortunately there is a lot to choose from. It is a question that is more than academic.

One of the shibboleths of the Iraq war was that "we need to stop them there" and the counter argument was " Iraq would be an incubator for jihadis everywhere." The latter argument seems to have been more right than the former. That is becoming more obvious in Afghanistan.

Whit, The same NYT article contains this. Consider the implications:

"...The Afghan intelligence service said last week in a statement that it had captured an Afghan suicide bomber wearing a vest filled with explosives. The man reportedly said he had been given the task by the head of a religious school in the Pakistani tribal region of Bajaur, and that 500 to 600 students there were being prepared to fight jihad and be suicide bombers.

The bomber said that the former head of Pakistani intelligence, Gen. Hamid Gul, was financing and supporting the project, according to the statement, though the claim is impossible to verify. Pakistani intelligence agencies have long nurtured militants in the tribal areas to pressure the rival government in Afghanistan, though the government claims to have ceased its support.

So numerous are the recruits that a tribal leader in southern Afghanistan, who did not want to be named because of the threat of suicide bombers, relayed an account of how one would-be suicide bomber was sent home and told to wait his turn because there were many in line ahead of him."...

And add this to the things to worry about:

..."The fundamentalists’ influence is seeping outward, with propaganda being spread on private radio stations, and through a widening network of religious schools and the distribution of CDs and DVDs. It can now be felt in neighboring tribal departments and the settled areas of the North-West Frontier Province. In recent months, Pakistani newspapers have reported incidents of music and barber shops being closed, television sets burned and girls’ schools threatened.

The militants are more powerful than the military and the local tribal police, kill with impunity and shield criminals and fugitives. Local journalists say people blame the militants for a rising tide of kidnappings, killings, robberies and even rapes."...

Let us return to the speculation about where things went wrong in Iraq. I will offer a few thoughts of my own and am interested in yours:

It is obvious is that without law and order nothing else is possible. The highest priority in any Muslim country and especially Iraq should be to maintain law and order. The moment that weakens or breaks, militias or Islamists will seek and gain control by any means. Law and order should trump everything else. That order must come from within the country.

Our concern should be that instability not be exported. We should not be breaking things to fix them the way we want them. That will not work and is not in Iraq.

Democracy imposed, is impossible. There is no yearning for democracy by the majority. They do not understand what it means or how to practice it. To them everything is negotiation to gain power with the intention of never giving it back after it is attained. Regardless of the intentions, bringing democracy to the Muslim world is a fool's errand. Democracy is no panacea. It is none of our business.

The religion of Islam is the heart of the problem. It is a cult and we make the mistake thinking it should be given equal respect and held equivalent to Christianity. The mistake is that in the Western Democracies we separate religion from secular life. Christianity allows that. We even quote something that most believe to be in the constitution, "the separation of church and state." That is impossible with Islam. Islam does not allow that. All life and society becomes part of Islam. If they pretend that it is possible, that is only a feint for the Islamists to gain control and create an Islamic state. 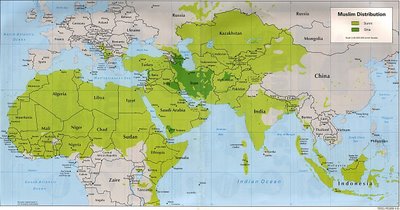 We should no more tolerate Islam in the West than we did Communism during the fifties. The European countries that did allow the Communist Party to participate put their societies at peril.

The implications of the Iraq War are many. Go to war to destroy your enemy. Destroy them completely and leave. If that is not your intention, then do not go to war. If Islam is as I believe it is, incompatible with the West, leave them alone.

For those Muslims already here, require them to conform to our standards and culture. Demand that they discard all practices that offend our ideas and practices including all forms of discrimination against woman. Remove their tax exempt status and if they are unhappy with that, invite them, encourage them, and then demand of them that they leave. We will all be happier and safer.

If we do not have the courage to do that, we will forfeit our civilization. It will only be a matter of time. Islam is at war with itself. That is unfortunate, but it is their problem to solve. George Bush made a mistake going into Iraq to transform their society. He had a right and obligation to remove the threat of nuclear or chemical weapons. He made a colossal blunder obligating the US to the mission impossible of changing their society.