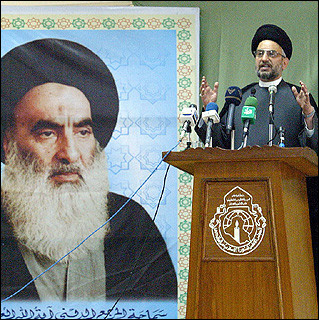 Search for peace: US reaches out to Shia leader
(AFP)


WASHINGTON - US President George W. Bush will reach out on Monday to a powerful Iraqi Shia cleric in search for ways to rein in sectarian violence spinning out of control and threatening to undo his plans for Iraq.


Abdel Aziz al-Hakim, who heads the pro-Iranian Supreme Council of Islamic Revolution in Iraq (SCIRI), will make an unprecedented stop at the White House as the president and his advisers try to halt what appears to be Iraq’s inexorable slide toward civil war.

In fact, UN Secretary General Kofi Annan suggested, in an interview broadcast Monday, the Iraqi civil war was already under way, taking the lives of innocent people every day.

“When we had the strife in Lebanon and other places, we called that a civil war—this is much worse,” Annan told BBC television.

Backing his assessment up, at least 30 Iraqis were killed and 50 new bodies were found in Baghdad Sunday in another spasm of religious strife.

Hakim does not hold any post in the current government because of a decision made early on not to include theologians in day-to-day government operations.

But he wields enormous power because of SCIRI’s military wing, the Badr Brigade, whose strength is estimated by US experts to reach anywhere between 4,000 and 10,000 men.

The invitation issued to Hakim has given rise to speculation that in the face of rising violence, the Bush administration has decided to cast its lot with majority Shias.

Hadley made it clear that Iraqi militias operating outside of the law have to be brought to justice, and US and Iraqi forces were already mounting joint operations “to go after death squad leaders.”