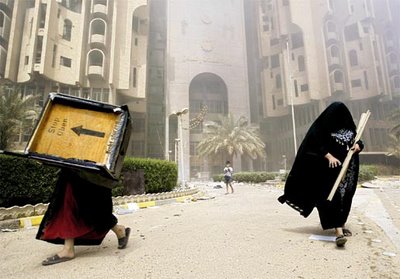 Last Saturday, December 16, 2006, we at the Elephant had a discussion on a refocus of priorities in Iraq. Iraq. It's the security, stupid. The New York Times is posting an analysis on the change in priorities in Iraq. President Bush has announced his intention to increase the size of the US military. This is a monumental shift in US policy. In March of this year, Bush speaking at George Washington University said,

"We have a comprehensive strategy for victory in Iraq -- a strategy I laid out in a series of speeches last year. Our strategy has three elements: On the political side, we are helping Iraqis build a strong democracy, so that old resentments will be eased, and the insurgency marginalized. On the economic side, we are continuing reconstruction efforts and helping Iraqis build a modern economy that will give all its citizens a stake in a free and peaceful Iraq. And on the security side, we are striking terrorist targets and training the Iraqi security forces -- which are taking responsibility for more Iraqi territory and becoming increasingly capable of defeating the enemy."

The new emphasis is being reversed with security the number one priority. That is the priority that should have been applied when Iraqi low-lifes were sacking the country three years ago. The US lack of planning for maintaining order after the initial invasion of Iraq is a blunder that will be recorded in military texts as a case study on how not to attack a country. It will not be the only foot note attributed to this administration. That obvious mistake telegraphed to the world and the enemies of the US that the US military was unwilling or unable to stop lawlessness in Iraq.

Well after three years, two thousand dead GIs, thousands more wounded by IED's, tens of thousands of dead Iraqis and untold billions of dollars, the Bush Administration is placing security where it should have been when the first day the fences were cut in Kuwait.

In proposing to send tens of thousands of additional troops, proponents of reinforcing the American military effort argue that the violence in Iraq is increasing at such an alarming rate that Washington can no longer wait for the newly minted Iraqi security forces to take on the main burden of securing the Iraqi capital.

The United States, they assert, needs to expand its mission by making the protection of the Iraqi population its primary objective."