Little Peter and The Wolf. 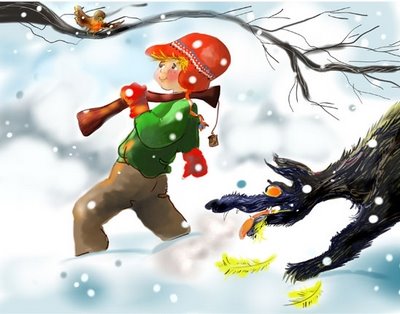 The story of Little Peter and the Pooty Wolf takes place in Texas in a meadow behind Little Peter's pretend ranch. Little Peter was staying at his daddy’s house, and in his room he had a view of the wide dry fields that overlooked a decrepit forest. Early one morning as the first rays of light crept in the window of Little Peter's room, Little Peter woke up and got dressed as fast as he could. Little Peter was very energetic and couldn't wait to go outside and play. In his Daddy's backyard was a gigantic tree that Little Peter loved to climb and a tall stone wall with a strong metal gate that kept Little Peter out of the dangers that lurked in the forest beyond the meadow.

Little Peter opened the gate and ran into the meadow while singing a melody. After a while Little Peter heard someone else singing a song. It was a bird, chirping along while flying graciously through the sky. "Hello bird," Little Peter said. "Isn't it a lovely day outside?". The little bird sang Little Peter a seductive song and Little Peter was very happy to have someone to sing with. Little Peter and the bird sang together while approaching the cool pond in the middle of the meadow. At the pond they met a chubby, yellow duck. The duck and the bird immediately began to quarrel as they decided which one was a better bird. "What kind of bird are you if you can't fly?" chirped the bird, "what kind of bird are you if you can't swim?" quacked the duck. They continued to fight not paying attention to anything that was going on around them. Little Peter's Daddy was paying attention however and he heard his cat creeping out into the meadow, ever so quietly. The cat spotted the bird and couldn't wait to have lunch. The cat crept closer and closer to the bird, it was ready to pounce when, "look out!" cried Little Peter's Daddy to the bird, the bird quickly flew out of the reach of the cat and onto a limb of the tree in Little Peter's backyard.

"What are you doing out here in the meadow?" asked Little Peter's Daddy. "I have told you time and time again that it is no place for you to play. There are dangerous animals in the forest just beyond the meadow. Do you want them to eat you?" Little Peter wasn't afraid of any animals. He knew in his heart and soul they would not hurt anything, but his Daddy dragged him back behind the safety of the wall and locked the gate. He thought he hid the key, but Little Peter knew best.


The wolf will continue to swallow more and more ducks, and little Peter and his friends better start to notice. The Washington Post has. Read it The new threat to Europe here.