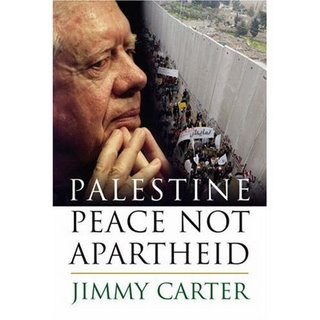 Schadenfreude, schadenfreude! Jimmy Carter has stepped in it this time and I’m delighting in his misery. His anti-Israel, pro-Palestinian screed of a book is drawing fire from all corners and I am happy! It was a pleasure to watch on C-Span as a he was called a "bigot, racist, and anti-Semite." Carter, being the clueless mild mannered, humanitarian leftist that he is, sat there appearing hurt and surprised. Finding scorn and criticism in America, like other scolded American big "L" liberals before him, Carter has turned to Europe for succor. Here, writing in the notoriously leftwing Guardian, he trots out the anti-Americanism ala Madeline Albright or The Dixie Chicks.

Here’s what I’m talking about:

The many controversial issues concerning Palestine and the path to peace for Israel are intensely debated among Israelis and throughout other nations - but not in the United States. For the past 30 years, I have witnessed and experienced the severe restraints on any free and balanced discussion of the facts. This reluctance to criticise policies of the Israeli government is due to the extraordinary lobbying efforts of the American-Israel Political Action Committee and the absence of any significant contrary voices.

It would be almost politically suicidal for members of Congress to espouse a balanced position between Israel and Palestine, to suggest that Israel comply with international law or to speak in defence of justice or human rights for Palestinians. Very few would deign to visit the Palestinian cities of Ramallah, Nablus, Hebron, Gaza City or Bethlehem and talk to the beleaguered residents.

What is even more difficult to comprehend is why the editorial pages of the major newspapers and magazines in the US exercise similar self-restraint, quite contrary to private assessments expressed forcefully by their correspondents in the Holy Land.

If I understand correctly, Mr. Carter is now in solidarity with the death cult Palestinians because he is also a victim of the JEWS. According to Carter, were it not for the JEWS who control the U.S. media and politicians, America could finally see Israel as the land stealing, crime against humanity that it is. In Mr. Carter’s “real world,” Americans are hungry for the facts but the Jewish lobby and its stooges in the media and Congress continue to suppress the truth.

Out in the real world, however, the response has been overwhelmingly positive. The book describes the abominable oppression and persecution in the occupied Palestinian territories, with a rigid system of required passes and strict segregation between Palestine's citizens and Jewish settlers in the West Bank. An enormous imprisonment wall is now under construction, snaking through what is left of Palestine, to encompass more and more land for Israeli settlers. In many ways, this is more oppressive than what black people lived under in South Africa during apartheid. I have made it clear that the motivation is not racism but the desire of a minority of Israelis to confiscate and colonise choice sites in Palestine, and then to forcefully suppress any objections from the displaced citizens. Obviously, I condemn acts of terrorism or violence against innocent civilians, and I present information about the casualties on both sides.

It is sickening to see a former President of the United States write such destructive lies and misrepresentations. It’s as if the man has been brainwashed on his many trips through the “occupied West Bank ghettos.” Watching Jimmy Carter over the past twenty years has been like witnessing a super slow motion, never ending train wreck complete with graphic, nauseating close-ups of the carnage. And yet, the obviously partisan hack claims that his purpose is altruistic.

The ultimate purpose of my book is to present facts about the Middle East that are largely unknown in America, to precipitate discussion and help restart peace talks (now absent for six years) that can lead to permanent peace for Israel and its neighbors.

Another hope is that Jews and other Americans who share this goal might be motivated to express their views, even publicly, and perhaps in concert. I would be glad to help with that effort.

How can I say this delicately? "Male Bovine Excrement!

Your bleeding heart half-truths might work with the ignorant and uninformed but some of us are old enough to have witnessed the truth all these years and we know the facts. We have seen the self-destruction of the death dealing, criminal, terrorist Palestinian thugs. If you’re not happy with your reception in America, run off to the Holocaust Conference in Teheran. I am sure your “facts” will be eagerly received there. After that, go see your buddy, Hugo Chavez, and cry on his shoulder.

Democrat President Jimmy Carter during the Cold War withdraws U.S. support for our longtime military ally, the Shah of Iran. Carter doesn't like his human rights treatment of Soviet spies in prison. The shah is overthrown, and Ayatollah Khomeini returns, seizes power and creates an Islamic nation. Opponents are killed, the idea of suicide bombers is introduced to the PLO, and Iran's oil wealth is used to spawn and support Hezbollah, a terrorist militia that killed 241 Marines in a Beirut bombing and that lately attacked Israel. Iranian radicals storm our embassy, taking 52 American hostages for 444 days. Carter fails in an amateurish attempt to rescue them. Eight military personnel and eight aircraft are lost in a desert foul-up.
Democrat Carter, self-assured and well-meaning but dangerously naive, was responsible for bringing into power an Iranian Islamic regime that's now creating nuclear weapons to wipe out Israel and blackmail the U.S. and Europe. Iran has further provided weapons and support to Shiite militia and death squads in Iraq and could provide nukes to al-Qaida, with which it has a working relationship.
After the Soviets meet the inexperienced Carter, they invade Afghanistan. Then the communists capture Ethiopia, South Yemen, Angola, Cambodia, Mozambique, Grenada and Nicaragua. The Afghanistan invasion attracts young Osama bin Laden, who raises money and recruits other Muslims to fight the anti-Soviet jihad. After the Soviets leave, this band becomes al-Qaida.
So Carter's glaring weakness in dealing with the communists and Iran leads directly to both the current terrorist nuclear threat of Iran and the birth of al-Qaida, a group of mass murderers that would never have been possible if the Soviet Union's Leonid Brezhnev had not been emboldened to invade Afghanistan after seeing an inept, appeasing American president, Carter.
Carter's ongoing, worldwide damage to America's future national defense does not end there. In 1994, civilian Carter goes to North Korea and negotiates an agreement that President Clinton and Secretary of State Madeleine Albright buy into. The North Koreans use our money and help to secretly spend the next six years in researching and building nukes. Deceived again by a worthless piece of paper, Carter becomes America's Neville Chamberlain.