Iran 's ambitions are beyond her reach. Let's keep it that way. 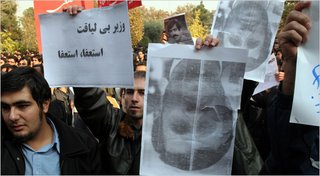 These are interesting times for the US relationship with Iran. Present events suggest that the US should use diplomacy and pressure. Three stories converge. The first is the story that Iran's external oil revenues are falling at the rate of 6% per year. That is without a sensible policy to reduce US imported oil consumption. In five years Iran will be working in an area of a critical reduction in cash. The National Academy of Sciences says restrictions on foreign investment, and mismanagement could eliminate Iran's oil exports by 2015. That is $50 billion a year.

The report concludes that Iran's hard-line politics have driven away many potential investors and that the welfare state has siphoned off oil profits that should have been reinvested in production. That study seems to be confirmed by a report by Reuters:

Foreign banks and financiers reluctant
December 27, 2006
TEHRAN–Iran, the second-largest producer in the Organization of Petroleum Exporting Countries, is having difficulties financing oil projects because foreign lenders are reluctant, the oil ministry says.

But United States pressure over Iran's nuclear program has forced many international banks to stop dealing with the Islamic Republic in recent months. Iran denies U.S. accusations that it is seeking to build nuclear weapons.

Vaziri-Hamaneh said Iran would turn to its Oil Stabilization Fund, a rainy-day account that absorbs oil income in excess of budgeted amounts.

Despite the financing problems, Iran has a number of major projects in the pipeline.

"In the last 15 months, $28.4 billion (U.S.) worth of new contracts have been signed and some new contracts worth $62 billion are being negotiated," Vaziri-Hamaneh said.
REUTERS news agency

At the same time Iran is acting expansionist by her support for Hezbollah, the Iraqi Shiites and now in Afghanistan.

Iran, which has increased its influence in Lebanon by supporting Hezbollah and in Iraq after toppling of Saddam Hussein, has also been making inroads into Afghanistan, a media report said on Wednesday.

Since the United States and its allies ousted the Taliban in 2001, Iran has taken advantage of the central government's weakness to pursue a more nuanced strategy: part reconstruction, part education and part propaganda, the New York Times reported.

Iran has distributed more than 200 million dollars in the country. It has set up border posts against the heroin trade, and next year will begin work on new road and construction projects and a rail line linking the countries.

In Kabul, its projects include a new medical center and a water testing laboratory.

Two years ago, the Times said, foreign engineers built a new highway through the desert of western Afghanistan, past this ancient trading post and on to the outside world.

Nearby, they strung a high-voltage power line and laid a fiber-optic cable, marked with red posts, that provides telephone and Internet access to the region.

And as the dispute over Iran's nuclear program has escalated, Iranian intelligence activity has increased across Afghanistan, the paper says quoting American and Afghan officials.

This has included not just surveillance and information collection but the recruitment of a network of pro-Iranian operatives who could attack American targets in Afghanistan.

The paper quotes Western diplomats as saying that Iran's goals in Afghanistan are to hasten the withdrawal of American troops, prevent the Taliban from regaining power and keep the Afghan west firmly under Tehran's sway.

"Keep this area stable, but make it friendly for them," said a senior European diplomat in western Afghanistan.

American officials told the Times that they are watching closely, and no evidence has emerged of recent arms shipments to Iranian proxies, as there have been in Iraq, or of other efforts to destabilize the country.

Comment and Conclusion: Iran is a major concern of US foreign policy. It is a country that in many ways poses a major regional threat to the Middle East. It is also a country with big problems internally and economically. It is also no match for the United States. We should not waste our advantages with an ill conceived policy. There is no economically successful Islamic country that is not an oil producing state. Iran is no exception. Iran is Persian and not Arab so it has no natural allies in most of the ME. Iran has a restless middle class that is aspiring to a normal secular life and many are fed up with the mullahs. The US would be very wise to be patient and help Iran accelerate the downward economic spiral. This is a real opportunity for the US to get back to a sane steady policy of diplomacy and economic pressure. Part of that policy should be a serious attempt to enact a real energy policy that has some bite and crunch. It also will give us an opportunity to regroup and rethink our military needs and policies. This is a good thing.