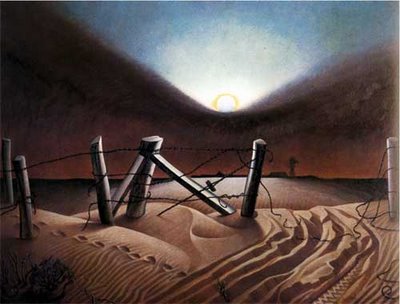 We are facing the most critical time in our lifetimes. I have read nothing as devastating at this article. I post it for debate without further comment.

Tony Blair went to Washington last week and won the headline he craved: “US/UK split on Iraq”. The split, over the role of Iran, Syria and Israel in the West’s exit from Iraq, was meaningless since they have no role. That did not matter. In this war of imaginings, appearance is all. Blair needed the headline for home consumption and Bush gave it to him.
Blair’s trip was occasioned by the publication of the Baker/Hamilton Iraq Study Group. This report is very bad — and very good. Its relevance to the conflict tearing apart Iraq is minimal. The group visited Baghdad for just four days and never dared to leave the green zone, let alone attempt to understand the conflict on the ground. The proposal that America withdraw its troops over the next 18 months and confine them largely to self-defence describes what is already happening.

The proposal to switch “control” of the Iraqi police from the Shi’ite interior ministry to the defence ministry is mad. There is no control of the police while the defence ministry, still a residual American front operation, is run by a Sunni. As for suggesting that the leaders of Syria and Iran come to America’s rescue, Baker/Hamilton seems to inhabit a different planet.

Why should these leaders rescue an American president who seeks their downfall when they are so enjoying his discomfiture. In a gesture of pure farce, George Bush replied that Iran would be allowed to help him but only if it stopped enriching uranium. Since when has a drowning man demanded that his rescuer pay for the privilege? America withdrew from Iraq — in the sense of surrendering effective control over its destiny — when it did not reinforce its occupation two years ago. The last bid to establish authority in Baghdad, Operation Together Forward, collapsed bloodily last summer. All sentences predicated on “what we should do in Iraq” are based on a fallacy that the verb can be made active.

There is no government in Iraq, not the Americans or the British or the Iranians or the Syrians, let alone Nouri al-Maliki’s regime, which barely rules its own office. The concept of Iraq as a coherent political entity offering Washington choices of action is nonsensical. The Americans can stay squatting in 55 bases across Iraq or leave them. Those are the only options.

Iraq is in a worse state than civil war. Such a war implies armies, fronts and secured territory. While Kurdistan and some tribally cohesive provinces enjoy a measure of stability under their sheikhs or militias, the Mesopotamian heartland has begun a horrific process of ethnic cleansing way beyond the aegis of any authority. This is pure anarchy.

To tell Iraqis they are “better off” than under Saddam Hussein, when 4,000 a month are being killed and water, electricity, health, education and domestic security are incomparably worse is absurd, as Kofi Annan pointed out last month. Reports from Baghdad indicate that it is virtually cut off, road movement depending on safe corridors (or massive amounts of armour).

As the morgues fill, the professional and managerial class is fleeing Iraq at a devastating rate of more than 1,000 a week. Death squads have taken to bribing hospitals to name patients for revenge killings. Religious vigilantes are separating families into ghettos where control of the streets lies with gunmen ready to shoot anyone they do not recognise. The sight of any uniform is terrifying.

Some $9 billion of oil revenue has been stolen because pipelines are unusable and oil must be moved by truck. Another $4 billion is vanishing each year on corruption while half the $18 billion that Congress allocated to aid Iraq has reputedly not left American shores. This is not democratic evangelism but grand larceny.

The good in the Baker/Hamilton report is not about Iraq but about America. Its pious proposals are cover for a simple message, that this venture has failed and America must cut its losses and run. The report ends the pretence that the war can be won if America “stays the course” and instead struggles to throw a smokescreen round the impending retreat. Neither Bush nor Blair is ready for such reality but a start has been made. Both leaders are isolated from their political and military establishments. The retreat from Iraq will be traumatic and Baker/Hamilton is an attempt to deaden the pain.

How long it takes America to leave is relevant only to the timing of Iraq’s reconstruction. A White House spokesman last week pondered that “we might leave behind chaos and a failed state”. But Iraq is a failed state. Where anarchy reigns people seek security in the familiar, in canton, community, family and tribe. Such medievalism is not susceptible to Baker/Hamilton options and proposals. It reflects a crude survival instinct from which societies can take years to recover.

Some Shi’ite strongman may emerge from the clerical militias and drive the Sunnis into Anbar and other enclaves in the west, as Milosevic did to Bosnia.

Baghdad is already experiencing bloodthirsty ghettoisation, worse even than Beirut in the 1980s. One day some federation of regions might keep one flag flying over Iraq. But the pieces are splintering fast, as did Yugoslavia.

Baker/Hamilton refuses to discuss orderly partition, even as the disorderly version rages under its nose. Whether US and British withdrawal will mean “a worse bloodbath” is irrelevant. The withdrawal is happening anyway. Delay is only an obstacle to the resolution of internal forces that must underpin Iraq’s future. That resolution will plainly be based not on some model army — even the “retraining” option has failed — but on the militias dominant in each part of the country.

If there is a role for Iraq’s neighbours in this, it will not be seen until the Americans have gone. The US presence has fuelled militancy throughout the region. This has made every ruler feel insecure, from Pakistan and Afghanistan to Iran, Syria, Lebanon and Palestine. It has turned Al-Qaeda from a terrorist gang that “got lucky once” into a liberation movement. The presence has served as a recruiting sergeant to Hamas, Hezbollah, the Taliban and dozens of murky apostles of anti-state terror. It has been a disaster.

Indeed it is impossible to exaggerate the counter-productivity of this venture. The naive belief that US power could create a beacon of secular democracy in the Islamic world may have been confined to the salons of neocon Washington and London, to whom war seemed like an intellectual party game. Yet it captured the leaders of two world governments and led them to their doom.

The goal of the American/Israel lobby was that the invasion of Iraq would secure the borders of Israel. It has done the opposite. It has menaced Israel with a cocksure Syria, invited by Baker/Hamilton to reclaim the Golan, and a radicalised south Lebanon that delivered Israel a bloody nose earlier this year. The US presence turned Iraq into a factory of terrorism and encouraged extremists in Iran to push their government down the nuclear path. If anywhere other than Iraq is a loser in this war it is Israel.

Therein may lie a silver lining. America has learnt what Britain learnt at Suez. The intoxicating vapour of imperial intervention soon turns sour. Henry Kissinger told the White House that “Afghanistan is not enough; they want to humiliate us; we need to humiliate them”. Bragging is not doing. Before the invasion the White House could joke to Blair’s head of MI6 that it was “fixing the facts around the policy”. But the facts tore the policy to shreds.

Strong countries can bomb and invade weak ones but not conquer them. They can sow destruction but not ordain peace. America will have humiliated only itself in this region and will not return for a long time. While its withdrawal from Europe would have been dreadful during the cold war, its withdrawal from this debacle can only be welcome.

The horror of this war may just induce the rulers of Iran, Pakistan, Syria and the Gulf states to seek common cause in guaranteeing Iraq’s integrity. They may recover their self-esteem and feel more secure in curbing their jihadist hotheads and Al-Qaeda cells — as they are not now. That is the only hope.

Over the past five years hundreds of thousands have died and tens of billions of dollars been wasted that could have done so much good in the world. The Fourth Crusade has been restaged largely at the behest of one man, Osama Bin Laden. It will end, as everything in history ends. But was there ever such a mistake?