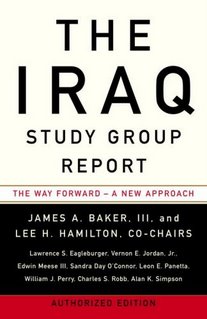 "The United States must build a new international consensus for stability in Iraq and the region. In order to foster such consensus, the United States should embark on a robust diplomatic effort to establish an international support ... [which] should include every country that has an interest in averting a chaotic Iraq, including all of Iraq's neighbors - Iran and Syria among them. Despite the well-known differences between many of these countries, they all share an interest in avoiding the horrific consequences that would flow from a chaotic Iraq, particularly a humanitarian catastrophe and regional destabilization."
- The Iraq Study Group Report

The Iraq Study Group Report is the consensus of a bi-partisan elite, only one of whom has been outside the Green Zone. It satisfies the left's demand for acknowledgment of the quagmire, but it fails to deliver on hyped expectations and has been widely panned by the critics as little more than a consensus for surrender and an outline for retreat. It could also be called aid and comfort for the other side. Iran and Syria can hardly contain themselves such is their glee at having humbled the Great Satan. Israel thinks the report is an embarrassment for both major American parties. Nancy Pelosi also calls for consensus.

The sad thing is: Other than throwing Israel overboard, asking the Administration to bow down before the Axis of Evil, and suggesting amnesty for the death squads, Baker-Hamilton doesn't recommend much beyond Bush & Rumsfeld's "stay the course" plan.

Baker says that the report calls for a "five-fold increase in the U.S. combat forces dedicated to the training and equipping mission." The report is silent about the question of where the trainers will be found. From combat units? Don’t we need those for force protection? The army is already short 100,000 soldiers. Then there is the issue of time. It will take months to train the trainers. Weren't we told a month ago, that we only have four to six months before the security situation is totally out of hand? This is how Speigel reported the situation yesterday.

In the US on Wednesday, all eyes were on the members of the Iraq Study Group. And in Iraq? Ten more soldiers died, at least 50 Iraqis lost their lives, power came on for only an hour in Baghdad and another 2,000 refugees left. Just an average day as the country disintegrates.

This is what Iraq has come down to? We're out of time, money, men and options. Our army is too small, the rotations are too frequent. The equipment is wearing out. There's no force reserve. The money is flowing out of the treasury like Iraqi blood. We must turn to Iran, Syria and the Saudis to bail us out. We must hand over Israel. The best we can hope to do is get some semblance of an Iraqi police force and army built-up before we leave in 2008. That's it? Three years, three thousand dead, twenty-thousand wounded and that's it? Sorry, that won't do.
About the report, James Baker frets, "I hope we don't treat this like a fruit salad and say, "I like this, but I don't like that. I like this, but I don't like that."

Must have consensus, you know? Thank you, Baker-Hamilton, and thank you, Pelosi-Reid and Company. By the way, where have you been for the last three years when the country really needed consensus?

Baker said "fruit salad" but what we're really being told to choke down is a shiite sandwich painted with a mustard smiley face. Everyone is expected to smile when you eat it and ask for seconds because that's all we've got and there's plenty of it. Manja!