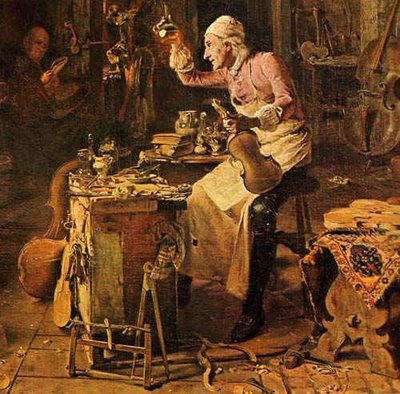 An interesting article on the Stradivarian violin caught my attention. It got me thinking about some other things.

For some time scientists and music officianados have been attempting to discover the secrets to the Stradivarius violin. In a broader sense it is a question we all ask from time to time about how certain people achieve remarkable success, whether they be a Don Imus, Bill Gates or Antonio Stradivari.

Usually in most human endeavors the results of success are obvious at the time of their accomplishment. That is not often so in areas of philosophy, politics or diplomacy.

Truman and Nixon were hated. Eisenhower and Reagan disparaged and Winston Churchill was hated and reviled by the English voters before and after WWII.

Today George Bush is a much reviled man, yet George W. Bush is not an evil man. He may be naive. IMO he has put too much trust and faith in friends and advisers and has a stubbornness that borders on denial. His plunge into Iraq uncovered a mess that existed before he got there with American forces and our allies. Only time will tell if any good comes from this and that will be constantly debated.

In general, time is not very kind to politicians in the short term, but later even a rough wine can develop into something worthy. Remember that. I try to do so.

Would I bet that the Bush Administration will mellow into a Stradivarian time in US politics? No. But will some of us, rightly down on him now, someday think, "Good old George?' Maybe. Stranger things have happened. More about the violin.

In May, a Stradivarius violin called The Hammer sold for $3.5m. The professional descendants of "the king of violin-makers" have dismissed research that claims to have unmasked Antonio Stradivari's secret. The Italian crafted over 1,000 violins, violas and violoncellos in the 1700s.

Experts have struggled to explain why the instruments sound so much better than anyone else's.

Researchers in the US said this week they believe a Stradivarius owes its distinct sound to a chemical treatment designed to kill woodworm and fungi.

But the BBC's Mark Duff in northern Italy says today's violin-makers in Stradivari's hometown Cremona - a small city in the floodplain of the river Po - are unimpressed.

One current violin-maker and restorer said it was absurd to try and reduce Stradivari's unique musical gift to a chemical reaction.

"What was the point of trying to dissect the beauty of a Strad?" asked another.

"To do so would be like trying to fathom the depths of Michelangelo's genius."