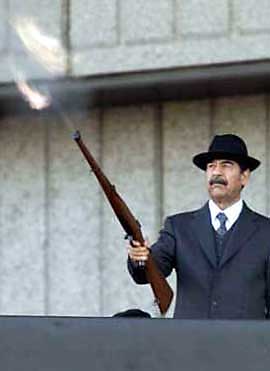 UPDATE: Saddam Hussein is dead. He was executed for crimes against humanity. The former dictator of Iraq was hooded, led to the gallows in Baghdad's fortified Green Zone, which houses his former presidential palace, before being executed without ceremony in front of Iraqi and American officials.

Saddam Hussein was a tyrant that showed no mercy to his enemies. He also had followers and friends. He had opportunities and made some huge miscalcultaions and caused the deaths of hundreds of thousands of human beings. He deserved no better than he gave.

Maybe none of us deserve mercy or maybe all of us do. I do not know which. I feel a sorrow for the inhumanity inflicted on those that suffered as a result of Saddam's rule. Some of his enemies probably needed killing, most did not, but all of them and his own were the result of his doing.