British and US tensions rising in Iraq and Iran. 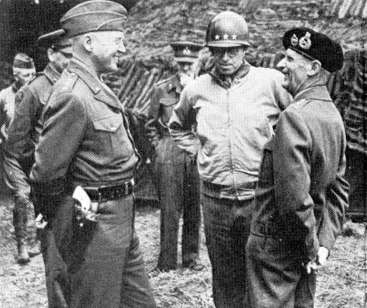 No two Anglo-American allies despised each other more than Patton and Montgomery. When you look at this grainy photo you can imagine what is going on in the brain neurons behind the smiles. Well some things never change. Nerves are being frayed in the "special relationship." Both in Iran and Iraq there is some consternation about strategy and tactics. Throw in the CIA for good measure and you have the makings of a donnybrook.
Of course Donny brook is in Ireland. We will keep it more Anglo-American and say things are between bollocks and Fubar.

British intelligence officers and military commanders have accused the US of undermining British policies in Iraq and Afghanistan, after the sacking of a key British ally in the Afghan province of Helmand.

British sources have blamed pressure from the CIA for President Hamid Karzai's decision to dismiss Mohammed Daud as governor of Helmand, the southern province where Britain deployed some 4,000 troops this year. Governor Daud was appointed in mid-year to replace a man the British accused of involvement in opium trafficking, but on Thursday Mr Karzai summoned him to Kabul and sacked him, along with his deputy.

"The Americans knew Daud was a main British ally," one official told The Independent on Sunday, "yet they deliberately undermined him and told Karzai to sack him." The official said the Defence Secretary, Des Browne, was "tearing his hair out".

Meanwhile, a confidential assessment of the situation in Iraq, seen by the IoS, has reported "serious tensions" in the American-British coalition. American commanders in the country are believed to oppose the British strategy for handing over Maysan and Basra provinces to Iraqi control as part of an exit strategy.

The disclosures come only days after differences between the US and Britain were on display during Tony Blair's visit to Washington, and the Iraq Study Group issued a report containing withering criticism of President George Bush's policies. With British commanders warning that they may not be able to succeed in Afghanistan unless forces in Iraq are drawn down, cracks in the transatlantic alliance are likely to widen.

The disagreements have come into the open after the summary sacking of Britain's protégé, Governor Daud. Although rival delegations from Helmand were in Kabul last week, one calling for his removal and the other demanding that he stay, a diplomatic source said Mr Karzai had listened to advice from "other powerful Western players".

Mr Daud, who had survived several Taliban assassination attempts, was seen as a key player in Britain's anti-drugs campaign in Helmand. He was also the architect of a deal under which British forces moved out of the town of Musa Qala, where they had been involved in fierce combat with Taliban fighters. But the Americans publicly criticised truces in Musa Qala and other Helmand towns, saying they effectively gave in to the Taliban.

A British diplomatic source said yesterday: "We backed Mohammed Daud because he was an honest man and a progressive man, so obviously this is very disappointing. However, it is also true that he was under tremendous pressure and his position was getting weakened. Where does this leave our policy? Well, we shall have to wait and see."

The British commander of the Nato force in Afghanistan, Lieutenant-General David Richards, has also come in for American criticism as "too political". The American supreme commander of Nato, General Jim Jones, has let it be known, according to sources, that General Richards "would have been sacked if he had been an American officer".

General Richards, for his part, has been frustrated that his call for extra Nato troops to form a strategic fighting reserve has been largely unheeded.

While the tensions between Britain and the US have burst into the open in Afghanistan, they have been simmering in Iraq. The confidential assessment of the situation there says American commanders want the British to be far more robust in confronting Shia militias in the south.