Brits to compensate wounded soldiers. Now what about the US? 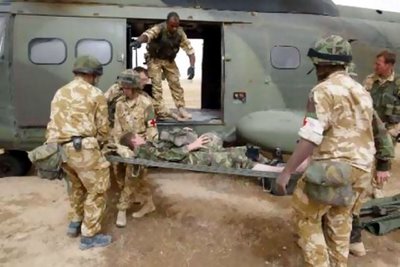 This is a very big deal and will be politically unstoppable.

Wounded to get millions in compensation

Hundreds of troops wounded in Iraq and Afghanistan are to be awarded millions of pounds in compensation following a ruling by the Government that they are victims of crime not war.


British troops wounded in Iraq and Afghanistan will be paid compensation on a sliding scale of about £1,000 for a small facial scar, up to a maximum of £500,000 for the loss of a limb
Forty injured servicemen are to receive payments of up to £500,000 each in a series of test cases. This is expected to lead to claims from hundreds more of the estimated 1,000 troops injured in combat in Iraq and Afghanistan since 2001.

Payments will be made on a "sliding scale" of about £1,000, for a small facial scar, up to a maximum of £500,000, for the loss of a limb. The ruling was agreed, it is understood, after Government lawyers raised fears that the Ministry of Defence (MoD) could be subject to a legal challenge by troops claiming they were victims of crime because they were wounded in Iraq after the end of "at war" hostilities in May 2003.

All those injured fighting in Iraq and Afghanistan, but who have decided to remain in the Army, could be entitled to lodge claims with the newly revised Armed Forces' Criminal Injury Compensation (overseas) scheme.

This is similar to that run by the Home Office, which makes payments to the victims of crimes such as muggings, rape, burglary and robbery. Troops will be informed officially of the new policy in the next few weeks and the first payments will be made in early spring.

Until now, the MOD has paid "criminal" compensation only for incidents where troops were injured in "civilian situations" such as a fight in a nightclub while off-duty.

Those injured in Northern Ireland during the Troubles were also eligible for such compensation because it was deemed that the terrorists attacking them were criminals and not enemy combatants in a conventional war.

The new ruling and expansion of compensation to the Iraq and Afghan conflicts means insurgents or terrorists launching surprise attacks and sabotage missions are also regarded as criminals and not enemy troops. It is thought the only circumstances where troops injured in Iraq and Afghanistan would not be eligible for criminal compensation is when they were involved in pre-arranged, offensive operations directly targeting insurgents.

But most casualties in Iraq have received their wounds through car bombings, sniping and rocket attacks — circumstances not dissimilar to most attacks sustained in Ulster. Defence sources say the ruling reflects the changing nature of the conflict in Iraq and Afghanistan. Although both theatres of conflict are described frequently as war zones, in strict legal terms British troops are not at war.

The revelation of the Government decision follows demands from MPs, military chiefs and the public, as well as a campaign by The Sunday Telegraph, for the Government to provide the Armed Forces with better pay, accommodation and medical care.

Defences sources have admitted that the awarding of compensation will be "complex and difficult", with evidence being presented to the panel by the serviceman's commanding officer.

Under the revised MoD compensation scheme, all wounded troops will be given legal advice from government lawyers as to whether their injury was as a result of a crime or of war. Those deemed to have been injured through "criminal acts" will be able to lodge compensation claims that will be assessed by a panel comprising a senior military officer, civil servants and a civilian.

The scheme will be open to troops who stay in the forces. Those who are medically discharge will receive war pensions, as is already the case.

It is understood that Major David Bradley, who was severely injured in August 2004 in an ambush in Basra, southern Iraq, is one of those about to receive compensation.

Major Bradley, who was the commander of B company, the 1st Bn the Princess of Wales's Royal Regiment, almost died as he took the full blast of a rocket-propelled grenade during an operation to rescue nine comrades.

An MoD spokesman said: "Ensuring that we obtain the best for our soldiers has meant that the criteria under which normal claims are submitted have had to be better defined. It is anticipated by early spring claims will be paid."