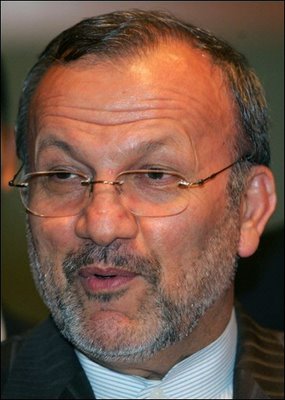 Radio Netherlands covered a new conference with The Iranian foreign minister yesterday. He is in the Netherlands but had something else on his mind. He likes the Baker Commission.

That caught my attention. I am not sure I like him being quite so ebullient. I would have preferred to hear a squeal or two from Iran, perhaps a yelp or something other than a Persian purr.

So far the only yelping is coming from the conservative bloggers and some on the right. It is impossible to know where this will go. Events can change any plan. That is what happens when you let things get out of control. You lose control.

Oh well, you better get used to the idea. There is no political or public support to do anything other than to make changes and leave Iraq. Whatever they call it, it is not going to be called a victory. That should not make anyone happy, except an Iranian Foreign minister and coincidently, he seems to be very pleased.

The Telegraph is reporting that The Pentagon is not happy.

If American combat troops were pulled out before Iraqi security forces were capable of battling the insurgency alone it would be courting disaster, according to defence sources.

Retired officers who served as military advisers to the group said they were not consulted about the final recommendations."

Iran's Minister of Foreign Affairs could scarcely have been more pleased. At a press conference held at the home of the Iranian ambassador to the Netherlands on Wednesday 6 December, Manouchehr Mottaki positively beamed as he stared at the assembled press.

The questions thrown at him scarcely touched at all on his visit to the Netherlands, focussing instead on the report presented the same day in Washington by the Iraq Study Group, the committee advising President Bush on the war in Iraq.

The recommendations contained in the document indeed came almost as a gift from heaven for Iran, as Mr Mottaki's words clearly indicated:
"It shows that the main part of the policy was wrong. And they could not listen, they could not hear this voice in the region. But now, they are hearing from their own people."

The study group's report, which addresses in detail what is going wrong in Iraq, also mentions Iran and says that one of the ways to achieve a better future for Iraq is to involve neighbouring Syria and Iran in that process.

Withdrawal
Mr Mottaki was clearly not unsympathetic to that proposal, but also commented that the Americans need to realise that the ultimate issue is the withdrawal of US troops from Iraq, which needs to get underway "in consultation with the Iraqi government."

The foreign minister said that Iran is prepared to help in Iraq, "for the fate of the Iraqi people is a matter of great importance to Iranians." However, he remained extremely vague about what precisely his country could do in that respect.

To look at that from a different perspective, one might ask: what is Iran already doing in Iraq at the moment? Is it, for example, arming certain Shi'ite militia forces? Is the Iranian secret service already working overtime within the borders of its former arch-enemy?

Pleasant position
On such issues, one clearly couldn't expect a satisfactory answer from Mr Mottaki. Moreover, the minister suddenly finds himself in an unusually pleasant position: on the one hand, Iran is needed, while on the other, it's under threat of facing sanctions in connection with its nuclear ambitions.

A pleasant position perhaps, but Mr Mottaki can't really be sure just how pleasant, since the Iraq Study Group report is 'merely' advisory, and it's not yet clear quite what President Bush and his administration are going to do with its recommendations. So, on Wednesday, Mr Mottaki decided to rub in the fact that the Americans are having major problems in two of his country's neighbours:
"The United States has had a good taste [of trouble] in Afghanistan and in Iraq."End of unilateralism
He also mentioned, in passing, Hizbollah's 'victory' over US-backed Israel in Lebanon only a few months ago, adding that he could not imagine any future military intervention in 'the region', i.e. in Iran itself:
"We do believe that the period of unilateralism is over […] that international behaviour based on using force is over […] and I do not see the US administration [imposing] another crisis in our region on the American taxpayers."

His underlying message is clear: Iran is an important power in the Middle East, and one to be reckoned with. Indeed, the greatness of his nation was more than hinted at in the printed invitation for Wednesday evening's press conference: "in the residence of the Iranian ambassador, the third largest in the Netherlands" … thanks, of course, to the taxpayers of Iran.