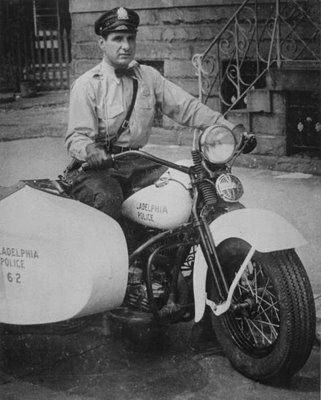 This picture is of a young Italian American when he was a motorcycle cop. That was Frank Rizzo, a man who would not be happy if he were alive today. Yesterday, on the net and in Philadelphia there were many tributes to another dead Philadelphia Policeman, Daniel Faulkner. Why after twenty five years are fair minded Americans talking about a dead Philly cop? It is after all twenty five years since Officer Faulkner was gunned down and murdered by the cockroach, Mumia Abu-Jamal.

Mumia is one of the icons of the psychotic left, Hollywood, French Intellectuals and American blacks who sing on the same side of the choir as those that went into joyous delirium when OJ shucked and jived away from "the man's" justice.

Mumia Abu-Jamal was tried and convicted for the 1981 murder of Philadelphia police officer Daniel Faulkner and sentenced to death. He is guilty as sin itself. He is not dead yet and in fact has a street named after him in some part of Paris. Such is the state of American justice and the never ending shame of the radical left. Need more and if you can stomach it, try this.

The radical left, arch liberals and most, but not all, Philadelphia blacks have had an acrimonious attitude towards the Philadelphia police department. It is mostly racial but not totally. There is plenty of black animus towards black police officers, but no cop fired them up like the Philadelphia legend, Frank L. Rizzo. 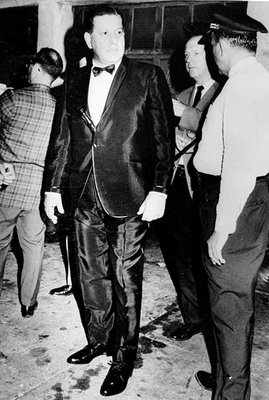 Rizzo was born in 1920 in the Italian-American neighborhood of South Philadelphia. In 1943, like his father before him, he joined the Philadelphia police force and rose to became Commissioner in 1966. Rizzo didn't care much for the sixties. To him it was all about law and order and he had zero tolerance for those who acted otherwise. There may have been days of rage in other American cities, but Rizzo through high visible police presence was determed to repress violence and answered force with more force. Other American cities burned, not Philadelphia. Rizzo deprived the left and anarchists of all their fun.

The man was asymmetric in force and style. Look left at this photo. Check the nightstick from his sharkskin tux. This is Rizzo in 1969, Commissioner Rizzo. While attending a banquet he was informed on an impending riot. Still dressed in his tuxedo, he took charge. No delegating for Rizzo.

Rizzo went on to be mayor. He switched parties from a Democrat to a Republican was elected mayor in 1971 and 1975. No cultural ambiguity or political correctness from Frank. In his second campaign, referring to being tough on crime, he promised "to make Attila the Hun look like a faggot."

He was no angel. Once, after being accused of bribery by Democratic City Chairman Peter Camiel, and being challenged by the Philadelphia Daily News to a lie detector test Rizzo accepted and said, "if this machine says a man lied, he lied."
After the machine showed that Rizzo was deceptive, and he was asked about what he thought of lie detectors, he said, "that machine is full of crap."

Rizzo lived a modest life and was never charged with anything.

Frank Rizzo died 16 July 1991. He is gone and so is a lot else of that era. America has always had flaws and so has her leaders. The cynical cadre on the left side will always make a cause of tearing down America and the tough patriotic men who created and slowly improved her. They will forgive Mumia Abu-Jamal for murdering a cop and forgive nothing from those that oppose them.

The Left has seized the agenda and will set the agenda once again. They know what they are about and their leaders stay true to their cause. The never deviate form staying the course. Conservatives have not done well because of misplaced loyalty to those that call themselves conservative and are not. Given that, which side do you think will win?