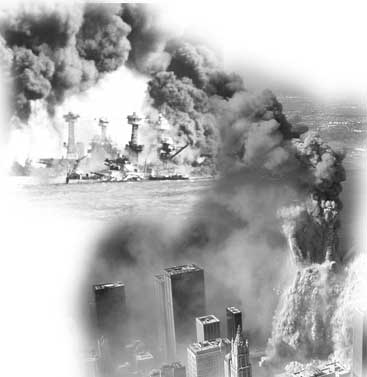 No event scarred American psyche like the Sunday morning news of 7 December 1941. There was no television, no instant analysis, no video tape or constantly replayed images. The news came by radio, word of mouth and newspapers. It spread through a rural underpopulated country that was coming out of a depression. The attack by the Japanese on an American naval base, located on an exotic island was an event beyond the imagination of almost all Americans. It was the original shock and awe, a shocking and awful day.

The attack was against ships and planes parked on a peaceful Sunday morning. It was an attack against the security, complacency and isolation of the United States of America. It united a country whose very name announced to the world it was already united. The country did not have to stay the course. It was dragged into a war not in a time and place of its choosing.

Lines formed at every recruiting station in the country. Young men, the original "boys to men", lied about their age, quit school to enlist by the hundreds of thousands. They sought a deferment from their normal life to join a cause and 400,000 of them never came home to the country they called United. They lost many an early battle and won a war backed by a country that knew and practiced service and sacrifice.

911 was another moment. It rated some bumper stickers, some dirtied and faded American flags and some big big slogans. The country was still called United, but America is a different place. It is an entitled America. It is an America with an attention deficit disorder. It is an America with more information and a populace with less knowledge. I doubt twenty percent of Americans could point to Iran and Afghanistan on a map or globe.

This is war without sacrifice by almost all. Almost. Troops may get applauded in air ports but hardly a member of Congress has a relative in the combat.