Should Women be in Combat? 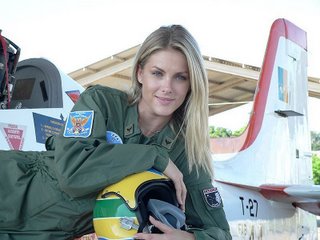 I do not see any reason for woman to be exposed to combat. My reasoning is basic. There is no argument that persuades me to believe that woman are better or as equally prepared for combat as men. The US military in particular is the NFL of war. When I see a woman lineman in the NFL, I may be persuaded things could be different for the military.

Woman do not belong on war ships and should not be flying combat missions. They cannot replace men in combat and when placed in mixed units, they provide a distraction. There are ample opportunities for them to serve in support units, technical and communications fields but not in near or active combat. The military should not be a social experiment.

The Washington Times takes a sober look at the consequences of woman placed in combat.

The number of military service women killed in Iraq and Afghanistan has reached 70, more than the total from the Korean, Vietnam and Desert Storm wars.   "Some have argued that the women who have died are no different than the men," according to a report noting the 70 casualties from the Center for Military Readiness, which opposes women in combat. "But deliberate exposure of women to combat violence in war is tantamount to acceptance of violence against women in general."

The reasons for the historical high casualty rate are multiple. Women now make up more than 14 percent of the volunteer force, performing a long list of military occupational specialties they did not do 50 years ago. Women in earlier wars were mostly confined to medical teams. Today, they fly combat aircraft, drive trucks to resupply fighting units, go on patrol as military police (MPs) and repair equipment.   What's more, the Afghan and Iraq conflicts are lasting longer than the relatively brief Desert Storm, which featured the first large contribution of American women in a war zone.

But the real difference in Afghanistan and Iraq is the battlefield. It is virtually every road, neighborhood and rural village. Insurgents do not just attack front-line combat troops. Suicide bombers and improvised explosive devices (IEDs) strike at any time, meaning that women in support units can be just as vulnerable as men in ground combat.   "What it means is, it's just unprecedented," said Elaine Donnelly, who heads the Center for Military Readiness. "It is something that people are not aware of, for the most part. Some of these stories are incredibly sad."   Her report lists names, ranks and cause of death of eight women killed in Afghanistan and 62 killed in Iraq. The vast majority are enlisted women killed by IEDs or other ambush.   This month, two female officers died in Iraq, including Maj. Megan McClung, 34, a Marine Corps public-affairs specialist. Illustrating there are no firm battle lines, the death happened when Maj. McClung was escorting journalists near Ramadi. Her truck was hit by an IED.   Paul Boyce, an Army spokesman at the Pentagon, said the service has gone to great lengths to field armored Humvees that can blunt the force of an IED, as well as individual body armor.

"Women soldiers are making vital contributions to our efforts to fight and win the war on terrorism," he said. "Recent operations in the war on terrorism consistently show that any soldier, whether performing combat or support missions, could be exposed to combat hazards."   More than half the 70 women killed were victims of hostile fire, as opposed to death by accident, which is added to the war's total casualty count. The 70 represents about 2 percent of the total death count of 3,253 in Iraq and Afghanistan.   Mrs. Donnelly said those killed include seven mothers with children 18 or younger.   "I think it's something that is very troubling, because it says that we as a nation are willing to tolerate violence against women as long as it occurs at the hands of the enemy," she said.

Women are barred from land combat under federal law and regulation. But they do serve in units such as military police and combat suppliers that puts them in the bull's-eye for terrorists.   Part of the problem, Mrs. Donnelly says, lies in the Clinton administration's 1994 decision to rescind the so-called "risk rule." It kept females out of support units that would likely expose them to hostile fire or capture. If this rule were still in effect, female casualties would probably be lower, Mrs. Donnelly said. Women remained banned from land combat.   Women have been able to serve as military police for some time. But in Iraq, military police are almost as likely to see combat as an infantryman. Mrs. Donnelly said the MP mission needs to be divided into all-male units, which are the most likely to see combat.