Talk about Iran being helpful in Iraq? Not so, says The Telegraph. 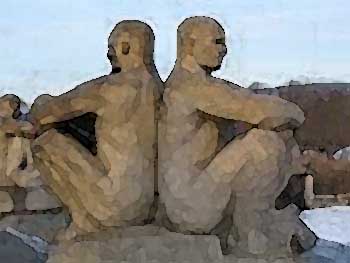 War on two fronts in Afghanistan


Just when it seemed matters could not get any worse in Afghanistan, along comes an altogether more alarming threat to Nato's attempts to restore order to that strife-torn region — in the form of Iran's Revolutionary Guards.

Ever since the US-led coalition overthrew the Taliban and their al-Qa'eda allies in late 2001, it has been assumed that the biggest threat to the successful restoration of Afghanistan as a functioning state was posed by the surviving remnants of the former regime and their sponsors in Pakistan.

Indeed, the main thrust of last summer's Nato offensive was concentrated along the Pakistani border, where a hard core of about 1,000 Taliban fighters have been attempting to re-establish a power base that could be used for an attempt to seize Kabul.


The British Army — which is in the vanguard of Nato's efforts to control the south — fought the fiercest engagements it has encountered since the Second World War in its campaign to subjugate the Taliban, and has been, in the main, successful in defeating a determined enemy.

The entire Nato effort in Afghanistan, moreover, has been predicated on the assumption that the key to success lies in suppressing the Taliban resurgence in the south, and persuading the Pakistanis to take effective action to dismantle the Taliban's training infrastructure in its lawless North-West Frontier provinces.

At no point have Nato's planners paid any serious attention to the other country whose border stretches for hundreds of miles along Afghanistan's western border, even though Iran's visceral hostility to the presence of a massive Western force so close to home is hardly a secret. This is despite the fact that the Iranians have actively supported, equipped and trained the insurgent groups that have caused coalition forces so much discomfort in southern Iraq.

But whenever I have raised the issue of Iranian involvement in Afghanistan on my visits to Nato headquarters over the past year, I have invariably been greeted with either blank stares or an eagerness on the part of senior commanders to move quickly to another, more amenable topic of conversation.

That state of affairs is unlikely to persist following the appearance in court earlier this week of a top British military aide on spying charges. Cpl Daniel James, who acted as the official translator for Lt-Gen David Richards, the British commander of Nato forces in Afghanistan, has been charged with "prejudicing the safety of the state" by passing information "calculated to be directly or indirectly useful to the enemy" to a foreign power, whose identity sources have suggested is Iran.

Irrespective of the outcome of the James case, the mere suggestion that Iran should be seeking to recruit someone with access to the innermost counsels of Nato's high command is indicative both of Teheran's intense interest in Nato's activities in Afghanistan, and its determination to ensure that the West is not allowed to succeed in transforming the country from Islamic dictatorship into stable democracy.

It also makes a mockery of the recent suggestion, advanced in both Washington and London, that the only way to resolve the region's difficulties is by engaging in a constructive dialogue with Teheran. Whether it be in Iraq or Afghanistan, the over-riding priority of the regime of Iranian President Mahmoud Ahmedinejad is to ensure the coalition's efforts at nation-building end in failure.

As in Iraq, the history of Iran's involvement in Afghanistan has been complex, but rarely benign. During the Soviet occupation of the 1980s, the Iranians supported one of the fiercest Mujahideen groups. More recently, the Iranians helped hundreds of al-Qa'eda fighters to escape from Afghanistan following the coalition's military campaign to remove the Taliban from power in 2001. Recent intelligence reports have indicated that many senior al-Qa'eda leaders — including two of Osama bin Laden's sons — are still living in Teheran under the protection of the Revolutionary Guards, where they are being groomed for a possible takeover of the al-Qa'eda leadership.

Nor is Iran's involvement in the region confined to Afghanistan. The Iranians also have close links with Pakistan, where they have been identified as one of the countries that bought blueprints for making nuclear weapons from A. Q. Khan, the so-called "father" of Pakistan's nuclear bomb.

Given the extent of Iran's interests in the region, it might appear strange that Nato commanders have appeared reluctant even to discuss the possibility that the Iranians might have their own agenda in upsetting coalition attempts to establish an effective government, particularly when commanders in Iraq have been frank in blaming the Iranians for helping to orchestrate the roadside bombs that have killed and maimed so many soldiers.

The reason for this apparent reticence on the part of Nato commanders is that, given the limited resources at their disposal, they have a big enough challenge dealing with the threat posed by the Taliban in southern Afghanistan, without running the risk of extending their field of operations elsewhere. But all that might soon change if, as some intelligence reports suggest, concrete evidence emerges that Iran is actively supporting and providing equipment to Taliban-related groups fighting Nato forces in Afghanistan.

"The Iranians are playing a very clever game in Afghanistan," a Western intelligence official based in Kabul recently told me. "On the surface, they give the impression they have no interest in what is going on, but behind the scenes they are working hard to influence groups such as the Taliban who are causing Nato the most problems."

Which would explain why the heavily fortified Iranian embassy in central Kabul, which is located less than a mile from the British mission, is second in size only to that of the sprawling American embassy.

If, as now seems likely, the Iranians are to become serious players in the new Great Game taking place in Afghanistan, then it is essential that Nato be given sufficient numbers of combat troops to ensure that the hazardous mission it has been asked to undertake ultimately ends in victory.