Let's help the Iranians win their own freedom. 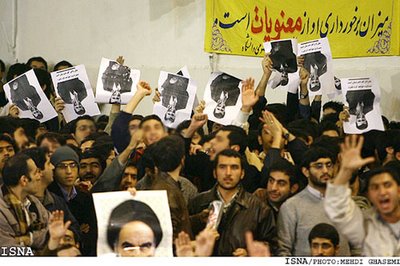 Several stories seem to be merging in Iran. It is now clear that the Iranian people in increasing numbers are getting fed up with the antics of the little creep who has more syllables to to his name than stature to his respect.

Mahmoud Ahmadinejad Is losing Iran. The only thing that will save him will be some ham fisted attempt to make him look to be the heroic defender of Iran. Diplomacy is slowly working. Young people are boldly and demonstrably getting fed up with the mullahtocracy. The picture of students openly ridiculing and defying Mahmoud Ahmadinejad is encouraging. This AP story is as well.

Former President Hashemi Rafsanjani, a relative moderate, polled the most votes of any Tehran candidate to win re-election to a key assembly post.

The biggest victory was for ''moderate conservatives,'' supporters of Iran's cleric-led power structure who are angry at Ahmadinejad, saying he has needlessly provoked the West with harsh rhetoric and has failed to fix the country's economy.

There are several reports that Russia is close to agreeing to increasingly tougher sanctions. Mahmoud Ahmadinejad, on Tuesday, warned Britain, France and Germany - against 'messing around' with Iran over issue of its nuclear programme. Deutsche Presse-Agentur quotes:

'These three European countries should know that if they insist on preventing the Iranian nation from its (nuclear) rights, then our people would consider this as hostility and accordingly change its approach,' Ahmadinejad said in a speech in Kermanshah, western Iran.
'Do not mess with Iran as friendship with Iran will be to your benefit in the future,' the president said in a televised speech."

The only thing that will save Ahmadinejad and his mullahs is if they are successful in goading the Bush Administration into an action that will rally the Iranian people around them. Reuters has a story of a major US build-up in the Gulf. A combination of a heavy US presence and increased diplomatic pressure will corrode the already fragile superstructure that represses Iran.

WASHINGTON, Dec 18 (Reuters) - The Pentagon is planning a major buildup of U.S. naval forces in and around the Gulf as a warning to Iran, CBS News reported on Monday.
A senior Defense Department official told Reuters the report was "premature" and appeared to be drawing "conclusions from assumptions." The official did not know of plans for a major change in naval deployment.
Another Defense Department official called the report "speculative" and a Pentagon spokeswomen declined to comment.
Citing unidentified military officers, CBS said the plan called for the deployment of a second U.S. aircraft carrier to join the one already in the region.
The network said the buildup, which would begin in January, wad not aimed at an attack on Iran but to discourage what U.S. officials view as increasingly provocative acts by Tehran.
The report said Iranian naval exercises in the Gulf, its support for Shi'ite militias in Iraq and Iran's nuclear program were causes for concern among U.S. officials.

The US was most successful from 1946 through the 1990's by providing diplomatic leadership and a high profile military presence to achieve strategic goals. To date the current Administration has not understood the craftsmanship in using the two in tandem. Maybe here they will.