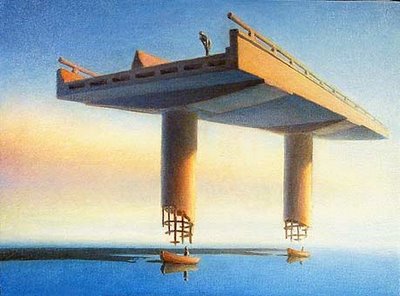 Reducing highway congestion and the demand for imported oil is an idea that most everyone would support. In theory of course. In practice, many would part company. That is human nature. I want you not to drive so that I can, unimpeded.

Use taxes in general are about as fair a tax as has been devised. Do not use, do not pay is about as sensible as you can get. Like all conceptual ideas, we have to ask the question:

How do we get from here to there? Here is one idea from the UK.

Motorists should pay at least £1.28 a mile to drive on the country's busiest roads at the height of the rush hour, the Government's transport adviser said in a report published today.


Tolling on motorways could become routine

In his long-awaited report, Sir Rod Eddington said that without such a scheme in place by 2015 the taxpayer would face a vast bill for a new highway building programme to cope with the mounting congestion.

"For me in the end, road pricing is an economic no-brainer," the former British Airways chief executive said today.

Sir Rod has called for pilot schemes to be set up as fast as possible, examining the impact road pricing would have on congestion within as well as between towns and cities.

An additional solution to road congestion would be the encouragement of car pooling and sharing schemes as well as the use if dedicated buses to reduce the traditional "school run".

But his report was dismissive of calls for the development of new high-speed rail lines within Britain.

Advocates claim they would bring economic and environmental benefits to the country. But such schemes, Sir Rod says, would not bring distant cities much closer together than with existing air links.

The Government should also take into account that faster trains could create higher CO2 emissions, he said.

Sir Rod has also called for significant spending on the busiest commuter rail lines and investment to relieve overcrowded stations.

Train operators should also try to ease rush-hour congestion by offering bigger discounts for those who travel at other times.