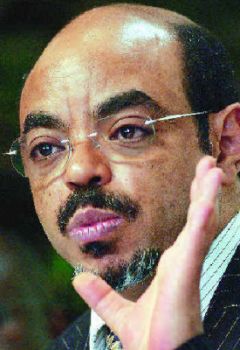 This Zenawi is no fool and no angel. He has been rough on journalists and the press and may have some very strong motivations to rehabilitate his personal and political image.

He may be joining the anti-terrorism bandwagon for his own domestic political reasons. In the past he has been accused of some pretty nasty business himself.

Ethiopia has a population of more than 70 million. It is one of Africa’s most populous nations. The United States regards Zenawi as an important partner in its fight against terrorism, and British Prime Minister Tony Blair gave Zenawi a seat on his advisory Commission for Africa.

This may be a sign of some new US realpolitik in dealing with the Islamists. If true, this is the way the war against Islamists should have been fought from day one. This is not badminton sports fans.

A hattip to Allen, the Islamists seem to have been very motivated to get out of Dodge with some degree of urgency . It seems that Zenawi is not planning to open a Guantanamo East. The Islamists are not happy. Check out their reaction at the bottom of this post.

Dec 28, 2006 (ADDIS ABABA) — Prime Minister Meles Zenawi has said that the Ethiopian National Defence Forces have accomplished 75 per cent of their mission in Somalia. He vowed not to give up the fight until extremists and foreign fighters had been crushed.

In a press briefing broadcasted by the TV, he gave to local and international journalists on the situation in Somalia today, Prime Minister Meles said the leadership of the Union of Islamic Courts (UIC) has been disbanded and its existence has now come to an end. He further added that Etiopian army have accomplished 75 per cent of their mission in Somalia.

But there are many things that remain to be done, Prime Minister Meles said. He also said that the terrorist leadership of the UIC has been disbanded and that its existence has come to an end.

The prime minister said that the Islamists have last night and this morning left Mogadishu and fled to the Somali border towns of Kismaayo and Marka.

The prime minister, who said that the joint Ethiopian-Transitional Federal Government (TFG) forces are around Mogadishu town, went on to say that The National Defence Forces of Ethiopia has not gone into Mogadishu yet and are consulting with clan elders inside Mogadishu and leaders of the TFG leaders on the way forward.

Ethiopian troops, who had pledged not to enter the city, were stoned by local crowds on the northern edge of the city, witnesses said. "How could we welcome an invading enemy," said one protester, Faiza Ali Nur.

Ethiopia and Somalia fought a bloody war in 1977.

Prime Minister Meles said some 2,000 to 3,000 fighters of the terrorist group and their backers have been killed while some 4,000 to 5,000 others have been wounded. The extremist leadership shall be responsible for all the damage that has occurred, he said.

Prime Minister Meles said that militias of the extremist group are handing over the arms in their possession to clan leaders and have rejoined their clan bases, adding that we have no problems with those militia members as they are peaceful Somali citizens.

He said that the work of pursuing the extremist group named Shabab, which is a collection of international terrorists and remnants of Sha’biyyah — reference made to Eritrean government — forces who fled to Kismayo, Marka and other border towns shall continue before they regroup and disturb the peace in Somalia.

"We need to pursue them to make sure that they do not establish themselves again and destabilize Somalia and the region," he said, predicting it would take a few weeks longer.

Islamic fighters have gone door to door in Kismayo, recruiting children as young as 12 to make a last stand on behalf of the Islamic courts, according to a confidential U.N. situation report, citing the families of boys taken to the front line town of Jilib, 110 kilometers (65 miles) north of Kismayo.

The prime minister said there is a strong solidarity between Ethiopia and the USA in the democratization and economic sectors, adding that in the counter attack that was carried out in Somalia Ethiopia has not received any military or weaponry support from the USA.

“The United States has not contributed a single bullet, a single soldier, or a single military equipment in this operation.”

The Ethiopian army will come out of Somalia in the coming few weeks after accomplishing its mission, the prime minister said.

The Islamic movement took Mogadishu six months ago and then advanced across most of southern Somalia, often without fighting. Then Ethiopian troops and fighter aircraft went on the attack in support of the government last week.

A statement composed by Sheikh Hamed al-Ali, distributed on his website and circulated among jihadist forums on Monday, December 25, 2006, titled: “Jihad Against the Hateful Christian Ethiopia,” seeks to incite Muslims for the purpose of the subject. Al-Ali, a contemporary jihadi Salafist scholar and ideologue who was designated as a terrorist by the U.S. Department of Treasury, provides a brief skewed history of Somalia and its position against Ethiopia and the West, and dispute over Ogaden province. Today, he finds history to repeat itself, and Ethiopia moves with the instigation and support of the West to “bury” Islam, which is supported by the Somali people, and create an unstable Somalia for its own purposes.

The sheikh states that Ethiopia’s war against Somalia is “unjust” and a clear case of aggression by an infidel country against a land of Islam. He charges that Ethiopia has no aim by “sabotage and destruction” and returning Somalia to chaos and misery. In addition to the Somalia Muslims who are stated by Hamed al-Ali to be obligated to join the jihad, Muslims in Yemen, Sudan, Africa in general, Saudi Arabia, and Egypt are called upon to participate.