Mr Litvinenko had converted to Islam.What was the dead Russian ex-spy up to? 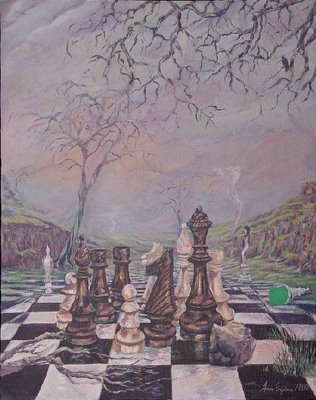 The Daily Telegraph has been told that Mr Litvinenko had converted to Islam.

Akhmed Zakayev, the leading Chechen dissident who lived next door to Mr Litvinenko, said: "He was read to from the Koran the day before he died and had told his wife and family that he wanted to be buried in accordance with Muslim tradition."

This is startling. Doug, here at the EB posted a link yesterday that caught my attention at Whit's post on Lies etc.. Later in the day, Wretchard, over at The Belmont, posted a story that was tangential to the big story pointed out by Doug. I put up a comment at the Belmont alerting Wretchard to Doug's post. Wretchard took another look at the article and as he is wont to do, developed a concise and I believe accurate assessment of the incident based on what is known at this time.

wretchard said...
There's too little hard information to judge what's happening here. Litvinenko himself categorically accused the Russian state on his deathbed, when a human being has nothing much to lose or gain either way.

But even if we completely discount Litvinenko's testimony we are still left the poison and the track from Russia. If Litvinenko's death were a work accident and he was not himself an actual target, the existence of the poison and the track means someone else is target. It is the existence of the weapons system and its probable source that is the key fact. Litvineko is incidental.

If AJ Strata's theory is correct, then the poison was being sold to parties who planning to poison someone else. As I said, it is the discovery of the operational capability that is the bombshell.

The clear implication of AJ Strata's speculation is that someone was buying the radioactive poison from the Russians and that perhaps the poison is still in the UK. It doesn't take a genius to speculate who that "buyer" may be. Pakistanis in the UK with access to al-Qaeda funds would be one obvious set of suspects. And with a poison so potent and incurable, it could be delivered to a statdium catering event, a hospital, an office building, a school or a church gathering.

But the alternative -- that the bulk supplies still aren't in London but still in Russia -- isn't very comforting. Because the radioactive poisoning capability is now known to exist, its small size means it can be delivered in the world within hours. Whether or not it is now in the UK is not particularly significant.

Collateral evidence suggests that a chemical warfare unit exists. Other people have ben poisoned. Nor is there any reason to think the available toxins are limited to polonium. And nothing in principle prevents the mass poisoning scenario from being implemented directly from Russia to anyplace in the world. Tokyo, New York, Flagstaff -- wherever.

Effectively we've just stumbled on a new weapons system with absolutely wonderful properties in the realm of terrorist warfare. I'm going to speculate that the bulk supplies are under positive control in Russia. They won't let the merchandise out until its ready to be used. It will be delivered just in time for the same reason nukes are kept under strict control until they are ready to be used. Even murder has logic.

But since any reasonable mass radioactive poisoning scenario will be effectively the equivalent of a unclaimed small tactical nuke or dirty bomb, the incident reveals our lack of a doctrine to deal with such threats. And if thousands of kids were poisoned with polonium tomorrow, would Blair nuke Russia? Or Pakistan? Would Pelosi even countenance the suggestion? Not as far as I can see.

We are in a war for our lives, whatever alternate universe certain people think they live in. And as Karen Carpenter said, "we only just begun".

Two comments. The story speaks for itself in some very disturbing tones.It is far bigger than most first thought. Pat Buchanan was quick to hypothesize that Putin was being framed. To my way of thinking the "death ded statement" is now suspect. Was Mr Litvinenko on a martyr mission? Never underestimate the zealotry of a convert. Are Muslim converts going to lead the next wave? This is very speculative at this time, but something that has bothered me since the shoe bomber incident.

My second point is this. The format here at The Elephant with the wide open, often off-topic running commentary by some of the outstanding news junkies and insomniacs on the planet often catches events well before the MSM sees the total significance. The information on the internet, combined with some of the exceptional sites linked here is a remarkable thing to behold. Damn good job all of you. Daily, I look forward to your input and to welcome new players. Hat tip Doug.