Should Georgia be Included in NATO? 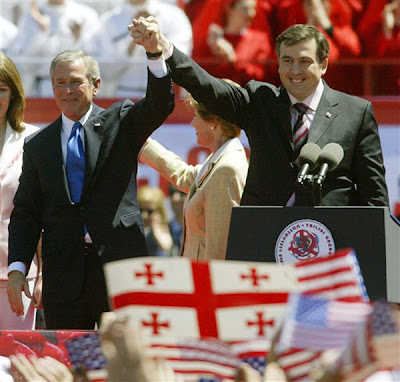 Do you see a President Obama in this picture?

Joe Biden predicted that shortly after taking office, President Obama would be tested somewhere by someone. Georgia seems a likely place. The issue will be NATO expansion into Georgia.

Putin is a ruthless, dangerous and violent KGB trained thug. He would love nothing more than to humiliate Georgia's Mikheil Saakashvili. Putin has publicly threatened to cut his ball off. Putin certainly has the EU by the balls regarding energy. A nice little nasty scare in Europe would be good for the suffering Russia energy business.

NATO expansion into Eastern Europe was always contradictory to the stated goal of including Russia into the West. A missile defense system, parked on Russian borders is hard to explain to the Russians while maintaining a straight face.

At best Obama is ambivalent over missile defense. Do not be surprised to see it be traded away in eastern Europe. Georgia in NATO? Not likely.

Putin has more to gain and very little to lose in challenging the new American President over Georgia.

Obama, Misha and the Bear

A wounded, angry bear is loose north of here, and it has people terrified.

The bear has ravaged this lovely country, a booming capitalist enclave that worships America, relies on a much-praised flat tax and has uprooted corruption almost overnight (in part by firing every traffic cop in the country).

A main road here is named for President George W. Bush, who visited in 2005. Everybody studies English, sometimes in the local McDonald’s franchises, and people seem bewildered at Western doubts about their behavior toward the Russians.

“We thought we had escaped them, and they came back and raped us,” said Alexander Rondeli, who runs a think tank in Tbilisi. “And people in the West are saying we have to tell them to be our guest.”

The architect of today’s Georgia is Mikheil Saakashvili. Misha, as he is universally known, is young, brilliant, charismatic, American-educated and staffs his government with people like him. You get the sense that any given Georgian cabinet official is about half the age and double the I.Q. of his or her American equivalent.

Now with Georgians mauled by the bear in the brief August war, they desperately want to join NATO for protection, and one of the few things that Barack Obama and John McCain agreed on in the campaign was to oblige by continuing the process of admitting Georgia into NATO.

In fact, that’s an awful idea. President-elect Obama needs a new approach to Russia if we want to avoid a new cold war, and we also need to get over our crush on Misha.

Look carefully and you see that Georgia isn’t quite the shining beacon of democracy that Americans sometimes believe.

Ms. Mosidze is bitter partly because the station she was working at a year ago was stormed by special forces carrying guns while she was anchoring a news show. She said that troops cut off the signal and then beat up some of the journalists. The channel soon was reborn as a pro-government station. Indeed, today all nationally broadcast TV stations are in effect controlled by the government.

Then there is the Georgian War of August. It’s still not clear exactly how the war started, but what is certain is that Misha’s narrative — an unprovoked Russian invasion that forced Georgian troops to try to defend their territory — is nonsense.

The most likely explanation is that Misha, tired of continuous Russian provocations and emboldened by American support, saw a chance to recover territories that Russians were nibbling on. That was spectacularly reckless, and as Human Rights Watch and Amnesty International have documented, the Georgian Army (along with Russia’s) fired cluster bombs that harmed civilians.

“It was possible to avoid this war,” said Nino Burjanadze, a former close ally of Misha who last month formed an opposition party to challenge him. “Because of miscalculation, my country was involved in a war it was clear that it would lose.”

Russia took advantage of the war on the territory of one of Georgia’s breakaway republics to invade Georgia proper, and, if it hadn’t been for forceful American and European protests, Russian troops might well have overrun Tbilisi.

Since then, the United States has announced a $1 billion package of aid for Georgia. We should remember that military assistance would be a waste, for Georgia’s Army will never be strong enough to deter Russia. In contrast, trade and investment give Georgia international economic weight and probably help discourage a Russian invasion.

Note to Mr. Obama: It would be a nightmare to have our troops tethered through NATO to Misha. In any case, Georgia doesn’t obviously qualify for NATO membership since it doesn’t control its full territory, while the talk about NATO pushes all the wrong Russian nationalist buttons.

Because Russia behaves irresponsibly — including its latest disgraceful threat to base missiles near Poland — the temptation in the Obama administration will be to continue with NATO expansion and perhaps even with the ill-advised missile system for Europe. (We have so many better ways to spend money!) Instead, let’s engage Russia as we engage China — while still bluntly calling Russia on its uncivilized behavior.

Poking badly behaved bears is no substitute for sober diplomacy. We don’t want Barack to be another Misha.