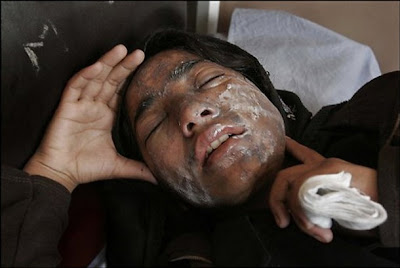 Where traditional societies usually assign the role to men of protector of woman and children, it is not quite the Islamic way. Islamic men, who seem to have some serious wanker problems get especially freaky around woman.

If they were real men, surely, they would promptly and with extreme prejudice end the practice of acid washing their woman and girls. Not so with the scourge of Islam, the HIV of religion. What a pathetic disgrace. Does Islam have no shame?

"Afghan police and security forces have detained 10 Pakistani nationals suspected of committing the acid attack on teachers and schoolgirls on Nov. 12 in Kandahar city, capital of Kandahar province," Dawud told newsmen in press conference in Kandahar.

He said that those suspects admitted they received money for 100,000 Pakistani Rupees each (around 1,200 U.S. dollars) from Taliban militants based in the Pakistan tribal area.

"One special bank account has also been set up by Interior Ministry for treatment and other relief assistance of the victims," Dawud added. "The detection operation is still going on."

Armed men riding on motorbikes on Nov. 12 poured acid on schoolgirls and teachers who were on their way to school, injuring four teachers and 11 schoolgirls, six of them seriously, according to Interior Ministry.

The fundamentalist Taliban insurgents during their 6-year regime closed down girl schools and confined women to their houses.