Mumbai Lesson - Buy a gun, learn how to use it and carry. 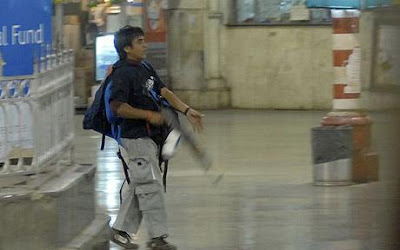 Preparations for the atrocity may have began a year ago in a remote mountain camp in Kashmir Photo: AP

There appear to be 300 dead in Mumbai, killed by five two-man killing teams using mostly hand weapons. Government could not protect them before hand, while it happened, and will not be able to protect others, or you, next week or next year.

Like the police, governments can investigate after the fact, but rarely intercede and protect unless there is a controlled environment such as an airport. An airplane suicide attack such as 911 is unlikely. Another Mumbai is practically guaranteed.

In the Telegraph article, they describe the training and motivation of the killers. It was formidable.

From my experience in Central America, I can assure you that private security guards are practically useless. They are poorly paid, predictable in their placement and habits, obvious to identify and easy to intimidate or in this case kill. Most will simply flee at the first sign of a serious challenge. That is our natural instinct, flee and stay alive. Your reaction and that of most others would be the same. However, there is an important difference.

If a person trained with a private weapon cannot flee, is armed and finds themselves trapped on a restaurant floor such as in Mumbai, they become highly motivated to survive. Five or six others randomly seated and scattered through other parts of a hotel radically changes the math.

The audacious attack which took a year to plan
The attack was planned with military precision.


Ten terrorists dedicated to fighting for an independent Kashmir were selected for an operation from which they were likely never to return.

The tactics were relatively simple: to strike at multiple targets while simultaneously slaughtering as many civilians as possible before going "static" in three of the locations within the city.

But such a plan would require a year of planning, reconnaissance, the covert acquisition of ships and speed boats as well as the forward basing of weapons and ammunition secretly hidden inside at least one hotel.

Nothing would be left to chance. Even the times of the tides were checked and rechecked to ensure that the terrorists would be able to arrive when their first target, the Café Leopold, was full of unsuspecting tourists enjoying the balmy Bombay (Mumbai) evening.

The preparations for the atrocity began a year earlier in a remote mountain camp in Muzaffarabad, in Pakistan- administered Kashmir, according to the interrogation of a 19-year-old believed to be the only member of the terrorist unit to be captured alive.
The Sunday Telegraph has been shown details of the interrogation which provide the first clues to the identity of the terrorists and the amount of detail which went into the planning of the operation.

Kamal has revealed to his interrogators that most of the volunteers spoke his native Punjabi and that all of them were given false names and were discouraged from interacting with each other beyond what was barely necessary.

During the months of training they were taught the use of explosives and close quarter combat. It was ingrained upon every man that ammunition would be in short supply and therefore every bullet should count.

The terrorists were also taught marine commando techniques such as beach landings at another camp at the Mangla Dam, located on the border between Pakistan-administered Kashmir and India's Punjab province.

Kamal revealed that once their training was complete, his team of four travelled to the garrison town of Rawalpindi, where they were joined by another six terrorists, who had been trained at other camps close by.

It was in Rawalpindi that the 10-man team were briefed in detail with digitised images of their prospective targets – the Taj Mahal and Oberoi Hotels, the Jewish Centre and the Victoria Terminus railway station. Each member of the team memorised street names and routes to each location. Kamal told his interrogators that most of the targeting information came from a reconnaissance team which had selected the targets earlier in the year.

From Rawalpindi, the team then moved to the eastern port of Karachi where they chartered the merchant ship MV Alpha and headed for Bombay.

It was during this crucial phase, as the cargo ship headed into the Arabian Sea, that the terrorists appeared to almost lose their nerve. The Indian navy, Kamal revealed, were very active, boarding foreign vessels and searching their holds. The terrorists thought their plan might be compromised so on the night of 15th/16th November, the teams used their inflatable speed boats to hijack a local fishing boat, the Kuber.
Kamal also admitted to his interrogators that three of the Kuber's four crew were immediately murdered, while the ship's captain was ordered to sail for the Indian coast. When the Kuber was within five miles of the coast, the terrorists slit the captain's throat and transferred back into their inflatable speed boats and headed for the lights of Bombay.

On landing the 10-man team, stripped off their orange wind breakers and began hoisting large heavy packs onto their shoulders.

Kashinath Patil, the 72-year-old harbour master, who spotted the boats moor alongside the harbour wall was immediately suspicious and asked them what they were doing. "I said: 'Where are you going? What's in your bags?'" Mr Patil recalled. "They said: 'We don't want any attention. Don't bother us."

The terrorists then split into two-man teams and launched their attacks.
Major General RK Hooda, the senior Indian commander, acknowledged the group, the Deccan Mujadeen, were better equipped and had a better knowledge of the battleground than India's soldiers.

After the battle, one member of India's National Security Guard, who led one of the assault groups against the terrorists occupying the Taj Mahal hotel, said they were the "best fighters" he had ever encountered.

He said: "They were obviously trained by professionals in urban guerrilla fighting. They used their environment and situation brilliantly, leading us (the NSG) on a dangerous chase through various tiers of the hotel which they obviously knew well. Their fire discipline too was excellent and they used their ammunition judiciously, mostly to draw us out.

"It was amply clear they came to kill a large number of people and to eventually perish in their horrific endeavour," he said. "Negotiating with the Indian authorities or escaping was not an option for them." 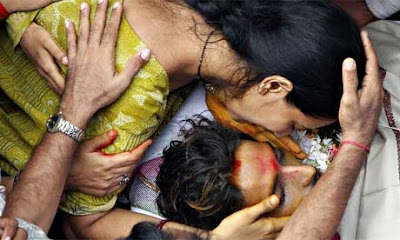 Neeta, the sister of Harish Gohil, who was shot dead by the terrorists, mourns over his body at his funeral in Mumbai. Photograph: Indranil Mukherjee/AFP