Terror and death in Mumbai 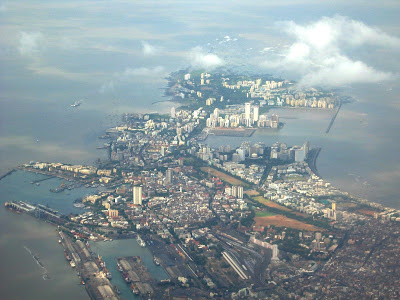 Mumbai looks good from the air.

"They were in no hurry. Cool and composed, they killed and killed
The young men came to by boat to unleash a night of carnage on the 'gateway to India'. Americans and British tourists were targeted, but Indians made up most of the victims"

The gunmen, most of them apparently in their twenties, wearing T-shirts, black shirts and jeans, came ashore in black and yellow inflatable rubber dinghies. Armed with automatic weapons, and carrying rucksacks packed with hand grenades and explosives, they abandoned their landing-craft on the beach, from where they would have been able to make out the outlines of their targets, some of Mumbai's most famous buildings.

It would appear that they had landed earlier, around 8pm, in a larger vessel at Sasoon dock and then used the dinghies to get closer to their targets in the heart of the city.

"Six young men with large bags came ashore, after which the two who remained in the boat started the outboard motor again and sped off," said one witness. "They were fair, chikna [well-off] and looked around 20, 22, 25 years old. They said they were students. When we tried to find out what they were doing, they spoke very aggressively, and I got scared."

Within two hours, the young gunmen were causing mayhem in the city that has always prided itself as being the hospitable gateway to India.

The targets for the attacks were clearly chosen for their iconic value, whether as symbols of Mumbai's power and wealth, cultural centres associated with western values or places where foreigners would be gathered. The inclusion of the headquarters of an ultra-orthodox Jewish group was obviously intended to send its own message.

By 9.15pm, the Leopold Cafe, a popular haunt for travellers for more than a century, and close to the Taj Mahal hotel, was under attack. A watering hole for writers and artists, it is also patronised by backpackers hoping for work as western extras in Bollywood films. Five men wielding AK-47 rifles charged in and opened fire without asking anyone to identify themselves. They lobbed hand grenades at the horrified onlookers.

"All of a sudden there was automatic gunfire. The whole place fell apart. It was tremendously loud. My husband and I were hit, as were lots of people," said Diane Murphy, 58, from Northumberland, who was shot in the foot. Her husband Michael, 59, is in intensive care after being shot in the ribs. As the couple dived to the floor, other diners, including Germans and Americans, ran into the kitchen or neighbouring rooms. It was only after a siege lasting several hours that some made an escape.

"We knew they were closer than they had been for the whole four hours. There were grenades going off, we started breaking the windows and ripped down curtains to make a rope," said David Gross, an Australian. "People were sliding out, like you're taught to do ... it was a one-storey drop on to broken glass." They scattered, leaving behind bloodstains and missing shoes.

A few minutes later, the Chhatrapati Shivaji terminus, previously known as the Victoria terminus, a world heritage site and one of India's busiest stations, was the scene of mayhem, with blood spattered across the station forecourt and platforms. Gunmen shot up the reservation counter of the station, randomly sprayed passengers, believed to be entirely composed of Indian travellers and commuters, and fled. "They just fired randomly at people and then ran away. In seconds, people fell to the ground," said Nasim Inam, a witness.

Cafe worker Pappu Mishra said two men dressed in black walked into the station pulling guns from their bags and shooting commuters. "Their audaciousness was breathtaking," he said. "One man loaded the magazine into the gun, the other kept shooting. They appeared calm and composed. They were not in the slightest hurry. They didn't seem to be afraid at all." At least 10 people were killed.

By 9.30pm, another team of gunmen were attacking the Taj Mahal Palace and Tower, best known just as the Taj, the city's premier hotel. Despite the security arrangements of a venue well aware that it might be a target, the gunmen appear to have had little problem gaining access.

"I was in the main lobby and there was all of a sudden a lot of firing outside," said the Conservative MEP Sajjad Karim, one of a delegation of European parliamentarians in Mumbai in advance of a European Union-India summit. "A gunman appeared in front of us, carrying machine gun-type weapons. And he just started firing at us ... I just turned and ran in the opposite direction."

Guests fled to their rooms and knotted curtains and sheets, which they lowered out of windows, and clambered down to safety. Some did not make it. Ralph Burkel, 51, a media manager from Munich, leaped from an upper floor window of the hotel to escape but fell heavily. He was able to reach a friend on his mobile phone who recounted that he was in agony. Burkel told him: "I've broken all the bones in my body. If no one helps me right now, I won't make it." He died before he could reach hospital.

Inside the hotel, the gunmen confronted guests and shouted: "Who has American or British passports?" Dining by the pool was Dalbir Bains, who runs a shop in Mumbai. She ran upstairs to the Sea Lounge restaurant, where around 50 other people were taking refuge. They hid under tables in the dark, hoping the gunmen would not find them and hearing the sounds of explosions elsewhere in the hotel. They managed to escape just before dawn.

There were bursts of automatic fire as other guests scattered. The shooting was followed by a series of explosions, just after midnight, that set fire to parts of the hotel. Screams could be heard from inside the hotel as flames burst from upstairs windows.

At least two of the gunmen were killed by police in the fierce battle to retake the hotel. Hermant Kerkare, the head of the police anti-terrorist squad and one of the most high-profile officers in the country, who was personally leading the operation, was one of the victims. There were repeated attempts by black-clad Indian commandos to take the hotels and free the hostages.

Even as this battle raged, Nariman House, the home of an ultra-orthodox Jewish group in south Mumbai, was coming under attack. Another group of gunmen had commandeered a police vehicle which allowed them to approach the HQ of the Chabad Lubavitch group. Two people are believed to have been killed and there were still reports last night of up to 10 Israelis being held hostage in the city.

By now the number of the attacks in the city was making it almost impossible for the police to keep up. Within moments, they were hearing reports of shooting at the Oberoi Trident hotel, part of one of the most prestigious chains of hotels in India. By 9.35pm guests there were trapped and in panic. "Save us", read a banner hung from one of the upper floor windows.

Alex Chamberlain, a British citizen who was dining at the Oberoi, told Sky News that a gunman ushered 30 to 40 people from the restaurant into a stairway and ordered everyone to put up their hands.

"They were talking about British and Americans specifically," he said. "There was an Italian guy, who, you know, they said: 'Where are you from?" and he said he's from Italy and they said 'fine' and they left him alone. And I thought: 'Fine, they're going to shoot me if they ask me anything' and thank God they didn't," he said. Chamberlain said he managed to slip away as others were marched upstairs to be kept as hostages.

Another guest fleeing from the Oberoi hotel was Mangho Kripalni, 84, who moved from India to New York as a young man and was taking his two daughters and granddaughter to India for the first time. "I just came here to show my family India but now I don't know why I did that," he said.

It would not be until the following morning that commandos were sent in to rescue people trapped inside. Two hotel staff, one security guard and two terrorists are thought to have been killed at the hotel.

While guests in both hotels spoke of some gunmen asking for Americans and Britons, the death toll made it clear that, by a vast majority, the main victims were Indians and that any foreigner was regarded as a suitable target. Among the dead are Japanese, Italians, Germans and Australians and among the guests rounded up were Yemenis, Spaniards, New Zealanders, Turks and Israelis.

The violence was far from over. As police sped from attack to attack, a taxi was blown up in Vile Parle at around 9.55pm. Gunmen also attacked Cama and Albless hospital and GT hospital, causing fresh panic. The hospital is known as a place where women and the children of the poor are treated and there was puzzlement as to why it had been added to the target list of the attackers. While there were reports of shooting, it was unclear how many died.

Also targeted by the gunmen was the 70-year-old Metro cinema, known as a popular hang-out for foreigners and cineastes as it shows English language and foreign films as well as being a popular venue for the premieres of mainstream Bollywood spectaculars.

As the sun came up yesterday morning and the city counted the cost, police declared a curfew around the Taj Mahal hotel, warning people to stay out of the area as black-clad commandos ran into the building seeking the gunmen and looking for remaining hostages and booby-traps. Soldiers moved from room to room, systematically flushing out gunmen. By 8.40am, all the hostages at the Taj had been rescued.

By the afternoon, bodies and guests who had been held as hostages were slowly emerging from the hotel. Witnesses reported at least three bodies, covered in white cloth, being wheeled out on trolleys. Other, some clutching luggage, were helped into ambulances.

"We're going to catch them dead or alive," Maharashtra home minister RR Patil told reporters. "An attack on Mumbai is an attack on the rest of the country."

While police and troops mopped up in the city, the Indian navy said its forces were boarding the cargo vessel suspected of being the mothership for the dinghies. Navy spokesman Captain Manohar Nambiar said that the ship, the MV Alpha, had recently come to Mumbai from Karachi, Pakistan. For a while, it seemed as though a new dimension was entering the equation but, after the ship had been boarded and searched, it was cleared and allowed to sail on. No weapons on traces of them were found on board and the naval statement confirming the all-clear came as Pakistani authorities warned that India should not accuse them of playing a part in the plot.

By 3.19pm yesterday the death toll had mounted to at least 119 people as police made attempts to flush out the remaining gunmen, around a dozen or so of whom remained holed up inside the hotels and Jewish centre. One man told reporters he had seen many bodies inside.

At Saint George hospital in south Mumbai, 63 people were confirmed dead, most from bullet wounds. Hospitals throughout the city started issuing lists of the dead and wounded as Mumbai began to count the cost of the massacre.