Chine Lectures on the Environment 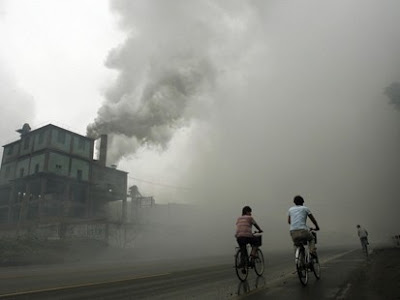 From a country that cannot keep melamine out of children's milk, which has killed hundreds in Central American with toxic toothpaste, purveys adulterated medicine to the unsuspecting and is a national toxic generating machine:

China has stepped up its rhetoric on climate change, calling on Western countries to do more to tackle the problem.

China's Premier Wen Jiabao says people in countries like Australia, can not go on living the way they are if the world's environment is going to be saved.

Speaking at a meeting with representatives of 76 countries Premier Wen said: "The developed countries have a responsibility and an obligation to respond to global climate change by altering their unsustainable way of life."

The meeting in Beijing is discussing how new technologies can tackle climate change.

United Nations climate official Yvo de Boer has told the same meeting that much of the "clean" technology which wealthy nations promised the developing world in the Kyoto Protocol has simply not arrived.