Change You Can Believe in, or Else. 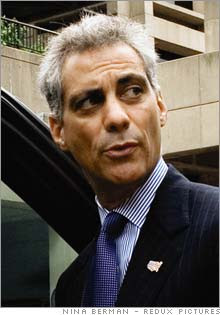 If you hire a shark, does that make you a shark?
If you send in an enforcer, are you, de facto, an enforcer, too?

President-elect Barack Obama, practitioner of consensus and preacher of civility, made a singular statement by choosing Rep. Rahm Emanuel as his chief of staff, the first hire of the new administration.

Brilliant, hardworking, in some ways he may be a good yin to Obama's yang. But I was very surprised because he has a very different personality type from those around Obama," longtime Chicago political consultant Kitty Kurth said by phone Thursday.

"I had first met Rahm after the '88 presidential campaign, on Mayor Daley's '89 mayoral race. He was always brilliant but a complete hardball player. The first six or seven times I met him, he never remembered who I was. . . . I never had anything he needed, so he didn't need to know who I was."

There are a million stories about the 49-year-old, profane, pirouetting, ballet-trained Emanuel.

Whether it's ripping up contributions of political donors who lacked the good survival sense to write a bigger check, or mailing a dead fish to express his extreme displeasure or repeatedly stabbing a steak knife into a table to punctuate a list of Democratic politicians he was putting on a "dead" list, Rahm Emanuel mastered hardball long before Chris Matthews peddled it on TV.

Would Emanuel be displeased by the above description?

Nope. He revels in the legend.

But he's nobody's caricature, either.

Friends from childhood include Wendy Cohen, a senior policy adviser for the Illinois attorney general, who remembers when the Emanuel clan bought the house across the street in the affluent suburb of Wilmette in the late 1960s.

"I have a memory of when they moved in, the dog ran away and the three boys" -- Rahm, Ari and Ezekiel -- fanned out like "roadrunners . . . feudal lords . . . they were loud and warm with hearts of gold," Cohen said.

That kind of affection may not be shared by members of Congress, Republican or Democrat, who have felt Emanuel's razor-sharp elbows in their ribs.

That kind of trust may not exist in the U.S. attorney's office in Chicago after they saw how Emanuel reacted to their indictment of Donald Tomczak, a boss hog of the city's Water Department. It was Tomczak, under orders from higher-ups in Mayor Daley's office, who dispatched an army of city patronage workers to guarantee Emanuel would win his first political race in 2002 for Congress. It was a close race and their help sealed the deal.

Emanuel, whose grasp of detail is second to none, condemned the corruption when the indictment was announced but improbably claimed to be clueless and even more improbably certified that Daley couldn't possibly have known, either.

As much as he understands the "old politics," Rahm Emanuel is a standard bearer of the "new." Responsible for engineering the current Democratic majority in Congress, Emanuel is so feared and respected that he amazingly was given a dispensation by his colleagues for "hiding under the desk" during the primary, endorsing neither of his friends, Hillary Clinton nor Barack Obama.

"That speaks volumes about his political skills," said Illinois state Sen. Jeffrey Schoenberg, who has known him for years.

But what does hiring Rahmbo now say about Obama?

It says that the incoming president's message may be delivered with a velvet glove but it covers an iron hand. That the organization he has created, relentless in its message control, ruthless in rebuking those who challenge it -- just ask WGN Radio's Milt Rosenberg -- brings Rahm Emanuel to the dance because consensus goes only so far, civility has distinct limits, and time is fast running out to staunch the bleeding of this country's profound crises.