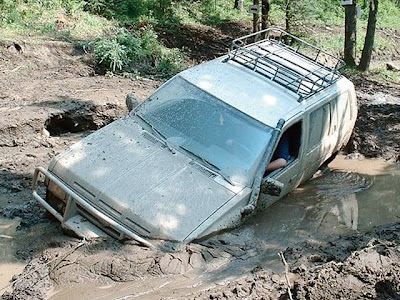 On his way to building his library.

The United States of America, within a year or two, may have its credit downgraded from "AAA." The Republican Party is already "bb" and will be unlikely to produce another Republican President in twenty five years. The only way that will not happen is if the Democrats produce a President less capable and more calamitous than George W. Bush. That does not seem possible. For the good of the country let's hope George Bush retains the title of last in the class. He earned it.

I know some of you will say, but he is a good man. He is not.

There is nothing good about taking the wheel of the the world's greatest country and driving it till every bearing is squealing for mercy. The financial ruin is a result of a leader who did not lead. He did not think through and consider the consequences of unwise action and the irresponsibility of no action. He did not exercise oversight. He did not ask and did not listen. He could not see and was incapable of articulating and persuading.

The Bush Administration Department of Justice lay idle while thieves ransacked the financial system. George Bush had more sympathy for illegal immigrants than ordinary middle class Americans who worked, saved, invested and voted. A man who could not bother to show up for Air National Guard meetings has deployed the National Guard for multiple missions to Iraq, a war that was to be paid for with oil, but likely to cost the US in the trillions.

When Bush had a chance to personally defend his country and volunteer to go to Viet Nam, he did not. His sense of duty did not go that far. He looked good in the uniform, but did not pick up the gun. Later in life, when trusted and given the US Presidency he was given a pen, a pen to use to veto and to protect the people who elected him from the excesses of a wasteful Congress. George Bush did not pick up the pen.

With great power comes great responsibility and trust. George Bush proved he was unworthy of such trust.

Last week, assembled at Miami’s InterContinental Hotel for a meeting of the Republican Governors Association, the governors seemed cheerful. The G.O.P. had lost only one statehouse on Election Day. The prospects for a Republican pickup in Virginia in 2009 were decent, and good candidates were plotting runs in states like California, Pennsylvania and Ohio in 2010.

There was even a sense of liberation in the air. For the last 14 years, there has been either a Republican Congress or a Republican White House, or sometimes both. Now the Republican governors are free of those heavy taps on the shoulder from their “betters” in Washington. So for these governors, this seems a moment of opportunity, in which their policies, their examples and their successes can help shape the future of the G.O.P.

The governors will be important. But there was an almost-never-mentioned elephant in the Versailles Ballroom (yes, that’s its name) full of Republicans: George W. Bush. For the hard fact is this: The worst financial crisis in almost 80 years has happened on his watch. The Bush administration will leave behind probably the most severe recession in at least a quarter-century. Fairly or unfairly, this will be viewed as George Bush’s economic meltdown.

If Republicans and conservatives don’t come to grips with what’s happened — and can’t develop an economic agenda moving forward that seems to incorporate lessons learned from what’s happened — then they could be back, politically, in 1933.

From 1933 to 1980, Republicans repeatedly failed to convince the country they were no longer the party of Herbert Hoover — the party, as it was perceived, of economic incompetence, austerity and recession (if not depression).

Only two Republicans won presidential elections in that half-century, Dwight D. Eisenhower and Richard M. Nixon. Both were able to take the White House only because we were mired down in difficult wars, in Korea and Vietnam. And Ike and Nixon were unable — they didn’t really try — to change the generally liberal course of domestic and economic policy. The G.O.P.’s fate on Capitol Hill was worse. The party controlled Congress for only 4 of those 47 years.

That’s what happens when a depression begins on your watch and when you can’t offer a coherent explanation of how and why it occurred and what you are going to do differently. That’s what happens when instead of having such an explanation, you spend decades in quarrels between pragmatic but unimaginative moderates who seek to be better tax collectors for the liberal welfare state, and principled but fanciful conservatives who hope for a wholesale rejection of that welfare state. And the fact that there were many successful Republican governors in those years didn’t much change the party’s status nationally.

Republicans and conservatives today face a similar challenge to that of 1976. A hawkish foreign policy, social conservatism and middle-American populism aren’t the problems. Those elements, as embodied on the Republican ticket by John McCain and Sarah Palin, produced a respectable 46 percent of the national vote — in the midst of an economic meltdown, with the Bush administration flailing and House Republicans rebelling and the Republican ticket lacking any coherent economic message.

I don’t pretend to know just what has to be done. But I suspect that free-marketers need to be less doctrinaire and less simple-mindedly utility-maximizing, and that they should depend less on abstract econometric models. I think they’ll have to take much more seriously the task of thinking through what are the right rules of the road for both the private and public sectors. They’ll have to figure out what institutional barriers and what monetary, fiscal and legal guardrails are needed for the accountability, transparency and responsibility that allow free markets to work.

And I don’t see why conservatives ought to defend a system that permits securitizing mortgages (or car loans) in a way that seems to make the lenders almost unaccountable for the risk while spreading it, toxically, everywhere else. I don’t see why a commitment to free markets requires permitting banks or bank-like institutions to leverage their assets at 30 to 1. There’s nothing conservative about letting free markets degenerate into something close to Karl Marx’s vision of an atomizing, irresponsible and self-devouring capitalism.

If conservatives do some difficult re-thinking in the field of political economy, they can come back. If they don’t — well, there were a lot of admirable conservative thinkers and writers, professors and novelists, from 1933 to 1980. But conservatives didn’t govern.