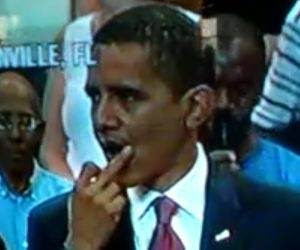 This is surely a change. It must be a black thing, because I do not remember any of the old white guy presidents doing it. Maybe it is setting some new standards, possibly in the wrong direction.
Forget about  bringing standards up. Let's reduce them to the lowest possible standard so no one has to feel bad about themselves. Barack know how to do it.
Who else could be better at it than the first black President? After all, we could not get the black illegitimacy rate any higher, or the numbers in prison greater. How about murders , or 7-11 stick ups or some good old gangsta rap? No change there, that is all mainstream now.
So lets put new meaning into Hail from the Chief from Barack Hussein Obama.