Love Does Not Conquer all in Washington. 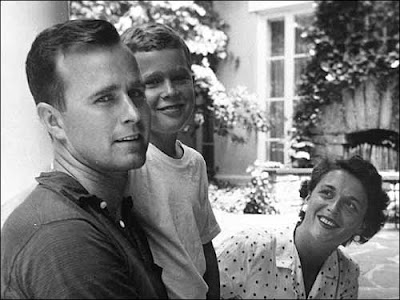 Young George Bush, the inarticulate, with mom and dad.
Tuesday's debacle was some 8 years in the making. Or more.

Consider: Eight years ago, George Bush rode into town from Texas with one thing on his mind: bringing a "new tone to Washington." He was going to use his Texas charm and drawl to end all of the partisan bickering. This was a tad dispiriting to t some of us who had supported him frankly. We were thinking more along the lines of some partisan victories in congress to roll back some liberalism. Actually, only Bush wanted a new tone. Neither his supporters nor his opponents had even the vaguest interest in it, dooming it from the start.

(What does this have to do with McCain v. Obama? Everything. Stick with me.)

Nontheless, with the new tone, its architect Karl Rove was going to fashion a "permanent Republican majority" governing coalition. We're not sure what this new permanent coalition was going to accomplish exactly, since the operational foundation of the new tone turned out to be giving in on your principles so as to be universally loved. Nontheless, Bush and Rove were confident it would work. To ensure it, they were quick to "reach across the aisle" to let ultra-liberals like Ted Kennedy and John Edwards from time to time.

Well damned if Bush didn't pull it off after all, in a Bizzaro-world fashion. There is indeed a new governing coalition in Washington as of Wednesday, and they are determined to make it permanent. They have the numbers to give it a good shot, too. And that new tone? That is the clanking of widespread hatred of a President who was, above all else, determined to be loved. There is little partisan bickering on this issue, since his approval ratings prove most are in agreement on his performance. This is sad and unjust, since his tax cuts, the Surge and the war on terror are all vitally important successes.

Even last night, this new tone President who was almost nowhere to be found during the entire campaign, could peer out his window at the White House and see how well his eight year capitulation had worked. He had not thrown a single elbow in this entire election cycle, yet the hatred was running thick. This was a classic “in your face” demonstration against Bush. Forget the vapor in Chicago, there was red meat in D.C. These folks have no idea that his terror policies perhaps saved some of their lives.

The man from Texas is profoundly hated by the left. But that is not the point. The man from Texas is not hated alone.. The left has projected their hatred of him onto us. His refusal to fight back for his principals was not the personal individual "falling on the sword" that he has convinced himself it was. When he refused to fight, he let us all down.

The result has been a directionless party with no effective titular head. Too much liberalism crept into policy and caused problems. Those problems, with a new tone leader not willing to point fingers, got laid right at the undeserving doorstep of the Bush Administration. That is our doorstep too, however, and Bush never seemed to understand this.

(We are getting to McCain v Obama, I promise)

Remember that the attacks of 9-11 were dreamed up, planned, staffed, financed, practiced and set into motion during the Clinton Administration, but it was deemed to have "happened on Bush's watch." Hurricane Katrina exposed decades of corrupt and inefficient Democrat control of New Orleans, but Bush (and by extension, all Republicans) took the blame. Thirty years of liberal energy policy came crashing down on us this year with four dollar gas, yet Bush, Big Oil and free enterprise took the hit. Two decades of liberal political correctness, fraud and crony capitalism in the form of Fannie Mae and Freddie Mac collapsed and took an over-leveraged economy with it. Again, Bush and free enterprise took the fall even though Bush actively fought the bad energy and lending policies. Interestingly McCain was at times quick to help this negative inertia with his public "straight talk."

Conversely, the Bush tax cuts have done a great job of undergirding the economy for nearly eight years and bringing us out of the tech bubble and 9-11. Bush and conservatism, however, received no credit for this. There had not been another terror attack on this nation since 9-11 -- an amazing feat no one thought possible -- yet Bush and his hawkish efforts were not recognized as the reasons for this success.

You see, all the new tone did was ensure that Bush received no credit when he deserved it, and he deserved it often. Yet, he often took all the blame when he did not deserve it. This led to a candidate like John McCain for the 2008 race.

Bush lavished his "a new tone" on the Republican left, supporting moderates in their primaries against upstart conservatives. But they would never return the favor when they got to Washington. Led by maverick John McCain, this wing of the party worked against Bush on almost every major legislative initiative. Some even say McCain took great satisfaction bashing Bush in the press, in retaliation for the 2000 primary season.

The result has been almost a total lack of conservative leadership anywhere. On the few occasions when Bush actually tried to practice conservatism, McCain and various permutations of the "gang of 14" were always there to torpedo the efforts. Meanwhile, the inarticulate Bush would often trot out some lightweight like Scott McClellan to occupy the bully pulpit, at least until the too-brief tenure of Tony Snow. There was no message, no leadership, no cohesion. There was, however, a 25% approval rating. Thus, when McCain emerged from the primary pack as the pundits' candidate of choice for the GOP, a run against Bush himself was the natural inclination.

This amounts to one of the great political ironies of all time, since in practice there is not that much difference between Bush's "new tone" and McCain's incessant need to "reach across the aisle." You can make the case that Bush's low approval numbers were to a degree the natural result of McCain's Bush-bashing plus Bush's new tone refusal to state his own case.

As we know, McCain made his willingness to work with Democrats a centerpiece of his campaign. He made a big issue of numerous pieces of legislation where he did so, and some of them are unmitigated disasters, chief among them is Campaign Finance Reform, which was going to take the money out of politics. Perhaps that did not go exactly as planned.

And neither did the flawed notion that McCain would swoop into the White House on this great wave of bi-partisan fever on the part of "independents." This is one of the great tea leaf misreads of all time. In my view, there is no great clamor for bi-partisanship, there is only the conceit that there is such a clamour. Surely, if such a public hunger existed, McCain would have won by double digits. He did not. He did not even win the moderates themselves. He lost them by 21 points. He also lost notable moderates like Colin Powell, Chuck Hagel and Lincoln Chaffee.

Reagan, on the other hand, carried the independents by convincing them he was right, not that he was one of them. Newt Gingrich and the Contract with America Congress won them by exposing the liberal Democrats as the corrupt political animals they were. There was no reaching across any aisle or any new tone with those successes. There was simply unabashed constitutional conservatism, proclaimed boldly and repeatedly (and at times with humor), and it resonated. You might even call it partisan.

Conversely, McCain would rarely mention conservatism or Reagan without quickly reminding us of times when he fought against them. Well no wonder it didn't sell. The salesman doesn't even like it!

Conservatism did not lose last night, as it was not on the ballot. The big winner was ignorance and the biggest loser was the Bush-Rove-McCain brand of watered down Republicanism. Yes, the Bush-Rove-McCain brand. They gave us each other. Much as the two men cannot stand each other, they are ironically much the same. And the result is indeed a new tone in Washington, and it is a scary dreary leftist tone.

We will never beat it back until the watered down bi-partisans are flushed from the system. Thomas Jefferson loved partisanship. Hugo Chavez does not. That should tell us all we need to know about this flawed path our party has been on for many years. Tuesday, our aisle reaching chickens came home to roost.